Death in the Desert

By Grey Lupindo
If you like riddles and mysteries, the new “Death in the Desert” site should be on your list of go-to places.    It opened October 1st and will remain open until October 31st.   The site was created by Slueth-Sayers Builders and is located at Death in the Desert, Fun and Games (130, 20, 22) 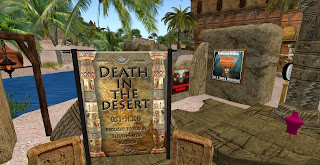 The mystery is that that Edmund Mallory, a great archaeologist but perhaps a not-so-great person, is missing.  He has lots of enemies, including rival archaeologists, shady businessmen, government agents, and even his own son.   There are notecards which give you the background on the historic site, as well as a few bare facts about Mallory.  After the original investigator was promoted to a position with INTERPOL, a new agent—you-- is assigned to the case.  To make matters more interesting, the evidence that the first Investigator found has been stolen from the police evidence locker.
Since I love hunts and mysteries, this seemed like a perfect challenge for me.    The locale is beautiful, too:  an Egyptian market surrounded by the desert, the Nile, a pyramid, and lovely oasis waterfalls.
The first problem I faced was too high a script count.   To its credit, the sim keeps lag down by keeping scripted avi’s at bay.    Warning messages told me how many scripts I needed to lose or risk being sent home.   It took a bit, but I finally got my weight down without shedding too many clothes.

You are instructed to first go to the police station to meet Police Chief Fasir.   This is easy since there is a large sign.  At the police station you receive a Case File filed with photos of the main suspects, interview notes, clues and other items.   You are then sent out to investigate.
To work the case you will need to look in every shop and back alley.   As you hunt you’ll find some freebies as well as some beautiful items for sale.   I picked up some free clothing, lots of snacks, and a few other fun items.   The goods for sale range from beautiful furniture to inexpensive trinkets.   My favorite furniture item was an inlaid desk with drawers that open and close.   My favorite fun item was a pool of blood on the floor, which was for sale for $30L.   I passed up buying either item, but I may go back after that desk.
There’s also a train and a boat to ride, both of which were fun and passed by sites where you might find clues.  I hopped off once or twice, but when I stayed off too long the train left without me.   It was a long, dry walk back to the market. 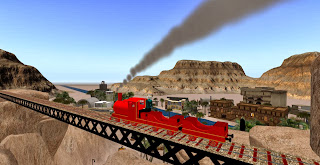 After receiving the case file, I snooped around and soon found informant Badru Fayad.   I collected some evidence off of him, including a pick axe and shovel.  Then I was off to dig up more clues.
As soon as I found my first person, I was able to access the interview sheet.   I quickly realized I was going to have to gather all of the basic information before I could solve the crime, just like a RL detective should do.   Once all of the evidence is gathered, the rules tell you to take your time solving the mystery.  If you guess wrong, you have to start all over gathering the clues again.
So far I’ve found four of the people I need to interview and lots of evidence, including a potentially useful recipe for poison.   I’ve filled up on snacks and Skeleton Cake, too.   In short, I had a great time.
The names of the ace detectives who have already solved the puzzle are listed at the entrance.  My name isn’t there yet, but I’m working on it.


Grey Lupindo
Posted by Bixyl Shuftan at 6:00 AM