Last year I reported on Shock’s movie night which is now a staple of the Sunweavers. Every evening at 6pm SL time, Shock plays a movie or two at http://maps.secondlife.com/secondlife/Sunweaver%20Space/253/175/451 one of the hangouts of the Sunweavers. Recently, I heard of something new. There's a new movie theater for the Sunweavers by Feilna Fermi. 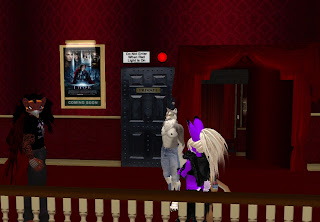 By grabbing a random LM sent by Rita Mariner through the Sunweavers group, I found Feilna’s theater. Shockwave Yareach and Rita Mariner were there when I warped in. Once in, I saw the front of a movie theater you might see in real life. When I walked in, I saw multiple theaters showing movie posters like in real life for example "Thor" and a "Lord of the Rings" movie.

Many other furry hangouts like the Ark and Anthroxtacy also have their own movie night but Felina's Theater http://maps.secondlife.com/secondlife/Sunweaver%20Isle/213/115/23 is another movie theater showing the same movie at the same time. Felina Fermi has been a Sunweaver living on Rita’s sim for a couple years before she added her own movie theater. 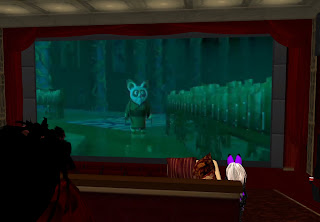 Shock’s movie hangout is just a grass square in midair with some furniture. Felina’s land on the other hand is a small theater with multiple movies. Using million media, Felina’s VCR was showing a large assortment of movies that you can choose from. First ask Felina Fermi to allow you access to the XL and Millions media video devices. It only takes a moment for her to add your name. Then using a text-driven menu you can pick out for hundreds of movies ranging from the "X-Men" movies to John Hughes’ "Breakfast Club," and more. Felina’s friend Earthy creates the stream for her XL movies. If you look through the movie list and you don’t see the movie you’re looking for click the store option and you may be able to find it.

On the night I wrote this article, Shock played "Hardware Wars," a spoof of "Star Wars" which had cheesy effects, and then "Kung Fu Panda" 1 and 2.

Another neat feature of Felina’s land is that her home is right there. I checked out her house and it was amazing. A lot of décor like pictures and kitchen assortments along a reproduction of her real-life home. Among the things I happened to see was her music keyboard along with her posters of video games art. Another thing I noticed there was 4 or 5 cats meowing like crazy in her back room with the video game art and her keyboard. It was interesting to hear random meows while I wrote this article. Good thing about the SL cats is they don’t knock over your coffee to mess up your computer. 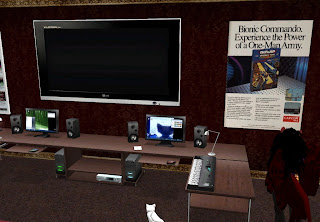 So for her it’s like having a movie theater at home. Felina isn’t just a one trick cat though. In real-life she has a music keyboard and she also composes musical remixes of video game music tracks. I got her Skype information she gave me a lot of her music files. Later on I’ll try them out and see how they fit with my live DJ mixes. She mentioned a couple times that she heard a song in her dreams in real life and she was able to create the song like that on her music keyboard. She recommended I try her final fantasy remixes that she created I might just do that.

Felina’s movie theater was certainly a welcome addition to the sunweavers group and family. Just
in case Shock’s movie land was filled up or maybe you wanted the movie theater feel Felina’s movie
theater might do the trick. Also ask her about access to her movie library if you want to check out a movie by yourself or with a friend. Just don’t mind the cats next door.