The fad of MLP which is shorthand for “My Little Pony” has spread beyond the MLP sims and current pop culture. In a roleplay in Second Life, there's a roleplay which combines it with the popular "Fallout" computer game. The storyline has an alternate MLP universe in which Equestria was destroyed by nuclear war with the zebras. A friend got me into the game, which is currently full. Vadise and his friend helped me create my character sheet. I picked the gryphon species and named him Dusty from GI Joe. 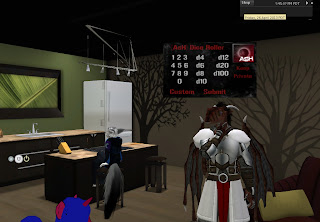 Ahead of time Vadise told me to buy a die roller from the marketplace for all of 150L called “Ash’s Dice Roller”. That way I can roll dice within SL for the game. The game play between the characters was in SL main chat and skype. Everyone was laughing at the antics of the game.

The background of the game as I started at level 1 is after 200 years since the nuclear war, ponies and other species have lived in a giant stable or fallout shelter. Ahead of time I had to have firearms, negotiate, persuade, and unarmed 30 or above to be in security.

I made my red brown gryphon well rounded with 7 Strength 6 perception 9 endurance 4 Charisma 3 Intelligence and 3 luck. Like a table top roleplaying game I have to make rolls to see if I make the check or fail. In the MLP fallout game I have to roll under to succeed. So to make an endurance check I have to roll a 9 or under on a D10. Pretty simple for endurance, but I’d have a lousy time trying to succeed on a luck or intelligence roll. I use the ash’s dice roller to roll not physical dice.

As a security officer Vanilla Surprise, my boss asked me to look for some missing persons: a Pegasus, an earth pony, and a male griffin. With another griffin, a female named Vertiga, we went to sub level 6, the level which the three missing ponies and griffin were last spotted. Playing off my intelligence of 3, I played a goofy character who decided to shoot his beanbag shotgun at rats crawling on the ceiling on the sewer pipes. Apparently my shooting the sewer pipes caused a funny situation where pony and griffin waste spilled out onto the floor. Socket, an earth pony mare and the mechanic of the group, checked in on the situation. Xinka, a zebra character with magical abilities and doctoring skill, heard my shotgun blam and came to investigate.

Veritgia, my partner as security, yelled at me asking me for the shotgun and that I’m derpy. Socket made me clean up the mess I made with his cleaning machine. I failed the mechanical skill check and broke his cleaning machine to make things worse. Socket the mechanic was shot by a sleeping dart and almost fell asleep. The group tracked down the dart shooter and chased him down a stairwell. Socket the earth pony mechanic breathed fire down the stairwell, which I thought was derpy.

With the fire on the stairwell no one could go down the stairs to chase down the attacker. Socket went into the fire herself taking some damage, but instead I asked information from my pipbuck or PDA about the dart gun that the attacker dropped. The DM gave me information when I used my turn researching into the serial number on the dartgun and found out the name of the attacker. Alas it was a waste as the fire died off the group discovered the attacker was dead from falling and breaking his neck some distance from the stairwell.

Everyone gained 500 XP for completing the scenario. I asked do I get bonus for killing the poor rats and the DM (Dungeon Master) Razi said no.

When I talked with Vadise who plays Xinka the zebra mare said I played the character perfectly playing off the Intelligence of 3. Here’s what he said:

Vadise Sagukari: "You did excellent for a 3 int character. Like totally absent of reality. You were super fun."

Isn’t that what dice roleplaying is all about?