One of SL’s oldest clubs is a steampunk/pirate inspired club. It’s been around for six years which is a long time for anything in real life or Second Life. Club cutlass may not be popular like IYC or SGB but it’s a long time staple of the Sunweavers. One day when I was djing Jenni Greenfield the longtime manager of Club Cutlass was a nice enough lady to tell me about her club. The Sunweavers are a group of furries that been around SL for a while headed by Rita Mariner who’s usually a bunny. 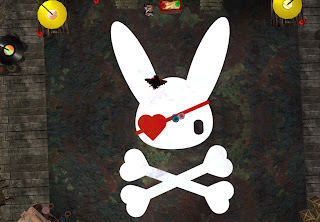 The Landmark takes you to a floating pirate base with a skull and cross bones dancing floor. In fact to dance you click on the dance floor and your avatar starts dancing in a complex series of dances. Not your average click a ball and pick a single dance ball, but instead a full set of dances to animate your character. Jenni says the club has been through many changes for six years. The newest design is simple and detailed for pirates and party goers of all ages.

One of the djs of Club Cutlass, Cynthia Farshore, likes to play rock music from old to new. Other clubs that came to mind were Dusk Griswold, Akea Grommet, and Shockwave Yareach. (No not the transformer the furry wolf named Shockwave). 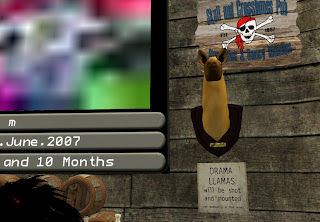 Jenni said one of the cool things about Club Cutlass is how there’s little or no drama. One of the plaques I saw was “Drama Llamas will be and shot and mounted (not necessarily in that order).” Every week there’s three events as Jenni ask for DJs to fill those events. Each event has a contest for men and women to win a Linden prize of 200 or so. For example going through the alphabet one event was best in anything U. Lots of furries come to that event in their underwear and or an umbrella. Better ask quickly if you want to dj for one of these three events the slots fill up fast. I procrastinated one time and the next day the slots were all filled already. 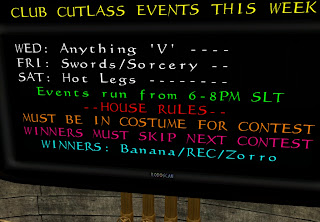 I asked Jenni what she liked most about Club Cutlass and here’s what she had to say.

Jenni Greenfield: That we've lasted so long, while I've seen many clubs die after a few months.

That’s certainly true, I agreed. Not all clubs and hang outs stand the test of time.

Jenni said she loves Halloween events around Club Cutlass. I told her in real life that I have a velvet cloak so I never have to buy a Halloween costume anymore. She said something similar

Jenni Greenfield: "I have a black cloak with celtic markings!" 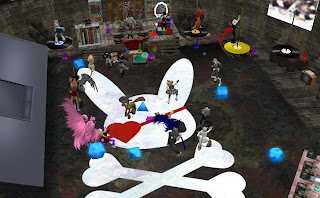 She also admitted to being a puppeteer for a long time like Dusk Griswold. I wrote an article about Dusk and her puppets in the SL Newser. Jenni says she has been puppeting since 2002, but hasn’t been practicing as much as her friend Dusk.


Jenni’s Club cutlass is certainly a neat club to hang out at. The music styles of the DJs are easy going and the conversation is laid back. Usually the DJs are good about music requests just ask and you shall receive. If you want a good place to relax and be a pirate Club cutlass is the place for you.