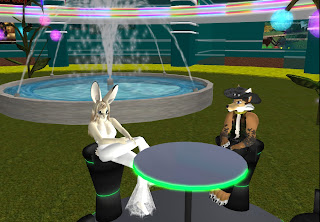 One day I sat down with the owners of the Green Meadows club Perri Prinz and RECoyote Mindes and asked them about their club, which was known as Xanadu before. Perri’s club is managed by Skylark Lefarve and is based on the Green Meadow Lands club in Perri’s very own writing series “Spectral Shadows.”

Perri explained that the club plays mostly various genres of rock, like 50’s rock and roll, swing, classic country, and classic rock and so on. The décor is very original like a 50’s swing wall design, plus album wall art all along the club walls. There are also retro game machines up on the upper floor. Not in the mood for dancing? Play a game of Pac Man instead. The arcade machines created from the real thing link to a game site where you can play the game matching the machine. Perri said that Truck Rolland designed the arcade games, but Perri designed the invisible overlays to lead you to the website. 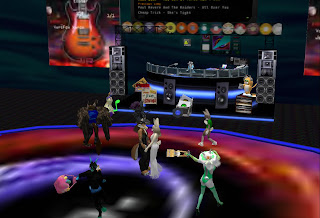 There are a few vendors around behind you when you warp to the club selling disco outfits and more. Curio Draco designed the dance floor and when Perri asked for permission Curio said it was ok to use the artwork.

Later that evening, Cynthia Farshore of the Sunweavers DJed at the Green Meadow Lands club and she played her mix of classic swing and more.  A lot of avatars were dancing and having a good time on a Sunday night. Skylark Lefarve during every event has a Linden contest for best in something for both men and women avatars. So there’s good music and a chance to win at Perri’s retro style club. 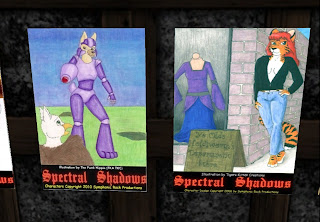 The teleport carpet in the plaza also warps you to Perri’s gallery of Punk Hippie’s art work commissioned for Perri Prinz’s "Spectral Shadows. So if you’re in an art browsing mood by yourself or with a friend you can check out the gallery of artwork created by Punk Hippie. In fact she’s the same artist that drew the cover for my children’s book “Ginny Griffin’s First Day Of School”. Punk Hippie’s art style is very simple but professional in my opinion, with bright colors and a fair amount of detail.

Stop by once in a while to Perri Prinz’s club with live rock or also my DJ set 4-6 SLT on Friday nights. And also if you are a classic rock DJ looking for a place to perform, why not apply here? Perri is always looking to new dj talent to add to her club.