Of Sound Mind at the Linden Endowment for the Arts 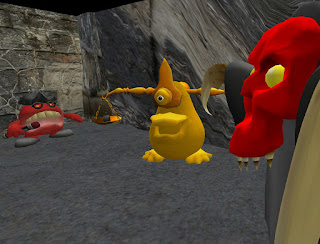 Talk about sounds in Second Life and Lorin Tone’s name is bound to come up. Thus, when Judi Newall sent me a notecard to alert me that Lorin and his friends had gotten a sim in the Linden Endowment for the Arts (LEA) I knew I was in for a treat. I teleported over there, and was met by Lorin Tone himself. He told me to explore, so that’s what I set out to do. I had a wonderful, joyfully noise-filled time, and so will you.

The build is actually a series of several different environments, constructed by Lorin’s long time collaborator and aptly-named recluse, Madcow Cosmos, along with other friends: Glyph Graves, P4ndor4, Quintessa, Meriadne Merlin,Inventor Alchemi, Marcus Parrott, Mia Anais, and Judi Newall. It’s a testament to Lorin’s spirit of teamwork that so many people love to work with him. 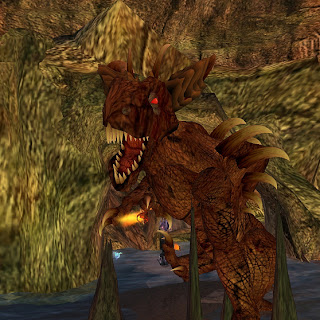 It is difficult to describe the builds, especially because they focus on sound—a concept that does not translate well into print. The exhibits are interactive, and rely upon you to touch and walk through characters and sculptures to create and loop sounds. For example: A beach side group of singing creatures loop sounds and chorus when touched. Touch them all for a pleasing cacophony, touch them again to change the loop played, and the whole sound changes completely.

Or, go to the Obligatory Spooky Cave, and walk through the falling water to activate sounds that echo and chime through the space, but beware the monster at the end. There are so many activities: Eat Brains under the giant skull, visit the jellyfish underwater that were made by Glyph Graves , see the Boolean Sequencer by Inventor Alchemi, play full songs on The Mighty SLurlitzer, visit Marcus Parrott’s café where the staff speak to you and sing the Fishead Song, and everywhere on the sim Madcow Cosmos’ alarming, cute and frightening characters, sticking out their tongues, winking, flapping wings, and most of all making sounds, sounds sounds. 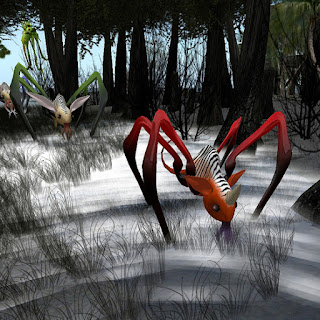 The whole point of this installation is this, according to Lorin Tone: Second Life is a place where so many different and amazing environments can be created, but what improves and enhances all of them is sound. Lorin and his friends have a mission to improve how sound is used in Second Life., and the sim is proof that they have succeeded.

Of Sound Mind is open now on LEA Island 19. Did I mention freebies? There are several scattered around the sim. I found a harp and some other goodies to play. There will be events and lectures and sound seminars throughout the installation. Check the Linden Endowment for the Arts website for schedules: http://lindenarts.blogspot.com .


DrFran Babcock
Posted by Bixyl Shuftan at 6:00 AM