Be the Ninja! The Nexus Core System RP Sim

Ninja Combat System is a complex MMORPG (Massive Multi Online Role Play Game) created especially for SL. It is located at NxCS (12, 120, 3159). The role-play is wildly popular, with over 4000 members. When I visited there recently, it was my first introduction to the world of Ninjas and role-playing games. I was fascinated by this detailed, creative world. Peaceful, beautiful music plays in the background, but danger lurks everywhere.

BioBlaze Payne and Silicon Plunket own NCS, and Numberofthebeast Angelus is the main Builder. Currently the role play area of Ninja Combat is set in Yōso no tochi, Land of the Elements. The site is expanding rapidly. Currently you can find a Village set within a volcano, waterfalls, meadows, and more. Outside of the role play area is a Mall, library, classrooms, and a combat practice area. If you are not familiar with MMORPG, there are classes, notecards, and friendly people who will help get you started. There is even a blog dedicated to Ninja Combat: http://blog.ncs2.net/. 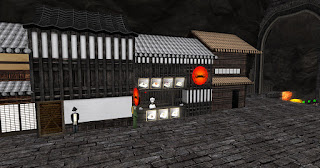 NCS can be enjoyed in many different ways. The premise of the game is built on a legend about three brothers who come from a distant world but then go their separate ways. The middle brother lived among nature, communing with the Forest and eventually the elements themselves. From the elements he gained longevity and prospered. His descendants became Yōso no rēsu, the Race of the Elements. Some of these people have the ability to control "Chi/Ki/Chakra" a spiritual energy that gives them power to protect or to destroy. This ability is so valuable that others will kill to have it.

In order to protect the children who are born with this power, the people joined together in clans and families to form Villages. The villages offer protection and employment for those with this miraculous ability. An individual Ninja can join a clan and take part in massive group events or go on individual quests and journeys. Elaborate histories of the groups and clans exist and drive the plot of this RPG. Each Ninja who joins the group brings his or her own story to the game, enriching and adding to the community. The Ninja advance through different levels and complete missions as they progress through life.

To play, you pick up the free game box on Marketplace. Inside the box you’ll find a HUD, weapons pouch, some clothing and both male and female shapes. The HUD is key to the game because it intertwines the RP with missions where you find and seek objects or engage in combat. Wear the HUD and go to the landing point listed above. Create your character by choosing a name, your abilities, symbols, village and clan. NCS guides you through the character building process. In addition to the HUD, notecards, signs and other tools are available to help you. 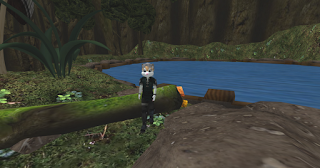 I decided to be a male Ninja. I wore the male student shape and put on the Nagushi uniform of Kunai Holster. NCS provided the Nagushi clan shinobi pants, wrist band, shingaurd boots, headset, and projectile pouch. It didn’t include a shirt, which isn’t a problem for a real male. In my case, I added the tunic from a male outfit available in the Linden Library.

Like any endeavor, the more thought you put into this, the better your outcome will be. But don’t let lack of experience stop you from trying this game. I was able to create a presentable character with minimal effort and no prior Ninja knowledge. Once I looked like a Ninja, I needed to gain some knowledge and experience.

In the library there are rows of books, some of which give out freebies and experience points. There are also classes, which BioBlaze Payne and others teach to newcomers. In addition to the library, a weapon practice area and other “safe” zones exist so you can learn Ninja skills without getting injured. For those who want to support the community with Lindens, there is also a way to purchase experience and other benefits. The purchases help the sim and the community, too.

But I wanted to jump into action. Ready or not, I teleported into the Village.

The Village is an impressive, multi-level structure constructed of dark, grey stone and linked by bridges. One of the bridges is featured as the cover art on the game box. A few private meeting rooms are tucked away behind the massive pillars. Fireplaces have been placed in the center of the room to offer warmth and light. The rooms are great places for small groups of Ninja to meet and plan their strategy. A hospital is located in the corner of one of the buildings, although it appeared a rock slide had damaged it.

The creative Builder of this world is Numberofthebeast Angelus. He took me on a tour of the Village, including some hidden and behind-the-scene areas. We started with a walk-through of the Village area, where we made a quick stop for Take-Out food. Angelus made the Chef, who is an NPC, a Non-Player Character. “The Chef,” Angelus said, “is my fav NPC to date.” In addition to cooking, the Chef gives out missions, such as sending a Ninja on a quest to find a needed ingredient. Angelus’ creativity and humor are found in the carry-out boxes, too. “Go Home Happy” is written on them.

New areas and creatures are continually being added to keep the game exciting and fun for the Ninja. From the Village we went to a hidden hot springs that is still being perfected. The giant Slug is slated to become a Mission Giver. Other creatures, like moles, leeches and ants, are in the works, too. But the human-looking NPCs were my favorites. The detail and diversity were amazing. Even more impressive is that they are only 1 prim each.

In addition to the NPCs, magical plants have been created at another hot springs. A new HUD is in the works that will involve a mining system. Different ores are being created, ranging from basic iron ore up to valuable diamonds. A new village that will be hidden in a forest is also planned, and Angelus will build living quarters for anyone who wants to live at NCS.

On another visit to NCS I met Vasari Nagushi, who is the Nagushi Sama of Noumugakure. He has been a member for three years. In addition to his duties as the Nagushi Sama and working security, he helps new people who want to get involved. His village has 21 people in it, but one of his goals is to increase that number. While we chatted, another Ninja, Isela Yuhara, joined us. She and Vasari Nagushi are members of the same clan, but reside in different villages.

But Ninja seek adventure, and it was time for me to return to find one. One of the first missions given a beginning Ninja is to kill the Lava bees that live in a giant bee hive. The bees are attacking the farmers and villagers and must be killed. As I stood there, debating whether I really wanted to get near the hive, encouraging messages came to me. One message said, “Lava Bees are attacking. This is a good chance for you to show us what you learned in School.” Another note encouraged me to “Go dwindle their numbers.” 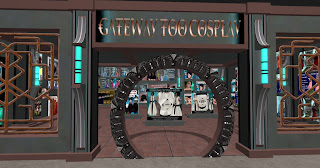 I had to try to save the Village. With no experience and even less knowledge, I took on the hive. At the end of my fight, I received a message that said “You have Damaged yourself 8 time(s)” and another one that said “You have done a Direct hit 6 time(s)”. Not bad, I thought. But the best message was “You have done Double Damage 6 time(s)”. I saved the Village—at least for the moment. It was time for a reward. Time to shop.

I went shopping at the Gateway to Cosplay store, located in the mall area. Here I found a wide variety of clothes and outfits for both men and women. The women’s clothes included beautiful silks, fishnet stockings, boots, and hats. The men’s Shinigami Captain's Haori outfit was very dashing. On the other side of the Mall I found the Birth shop, where skins, eyes, and shapes are sold. The Mall is large, with lots of room available for more shops.

If you have ever wanted to explore the fascinating world of the Ninja, the NCS sim is a great place to start. With the HUD, notecards, posters, and classes to teach you the basics of this world, you can be a Ninja. You, too, can find adventure here.