Any1 Gynoid, noted lately for her articles on the “Occupy” movement in Second Life, recently attended the University of Western Australia’s 3-D Open Art Challenge as they announced their winners this Sunday December 11th at 6 AM SL time. A total of 59 art exhibits were elgible for a 100,000 Linden prize, with 24 competing in a seperate non-scripted contest. In the “MachinimUWA 4: Art of the Artists” film contest, 83 machinimas were judged as well. 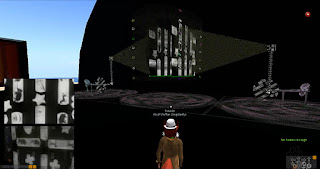 By a single point, the winner of the Open Art Challenge was Misprint Thursday’s “Digital Glove.” Described in Prim Perfect as a “complex and thoughtful work,” one was asked to wear a HUD to get the full bennefit of this exhibit that was a combination of audio, motion pictures, and static objects. Taking a look at it, I personally do not know how to describe it other than I haven’t seen anything like it before. Misprint also tied for 5th Place in “Paranormal Frottage.”

"I am so honored to have two spots in the top 10 of the year...I am amazed at the potential of the medium and look forward to seeing it progress. I am very thankful for the work that Jay Jay, FreeWee and the judges put into this-it is no small task. We have a world of people and possibilities here and it continues to move me. So, thank you."

Those wanting to hear more from Misprint can do so at the Christmas Expo in the Silver Bells sim on Friday when she is interviewed. 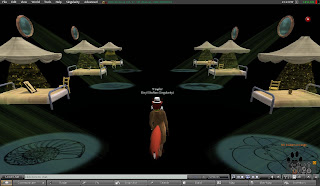 Second place went to “In Dreams” by Blue Tsuki. This exhibition showed a sleeping area full of beds, but instead of sleepers, the beds had various objects on them. Of coming in second, Blue spoke, "Misprint is very desring, I don’t mind losing to her(smile). But then there were so many deserving that I am so surprised." Blue recieved 75,000 Lindens.

Third place was “The Chasm” by Oberon Onmura. This was a simple exhibit of two wedges back to back to each other with a small gap in between. On each of the peices lay an avatar, humanoid with a monocolor skin, it’s AO causing it to reach out to the other. For those going about the UVA exhibition and see two avatars on your radar next to one another, it might be this exhibit. I say might because avatars can crash. And sometimes they can fail to rezz, such as when I came across it. Oberon recieved 40,000 Lindens. As shown when Second Life Newser looked at his Burn2 exhibit, Oberon’s work sometimes involves the use of avatars as art.

Fourth place went to “Strange Plant: Ugliness and Beauty” by Claudia222 Jewel, whom recieved 30,000 Lindens as her prize. Tying for fifth were “Paranormal Frottage” by winner Misprint Thursday and “Excerpts from Realities” by Glyph Graves. Seventh place went to “Not Everything is Black & White” by Fushia Nightfire. Tying for eighth place were “Fantasia En La Sombra” by Romy Nayar and “It’s Raining in My Heart as It’s Raining in the Town” by Cherry Manga. Five exhibits tied for tenth place, “Harmonies in C Great” by Artistide Despres, “Three Little Turns and It Goes Away” by Josiane Sorciere, “The Dock Spirit” by Scottius Polke (designer of Lunamaruna), “Venustrap” by Claudia222Jewel, and “Shattered” by Ginger Also. 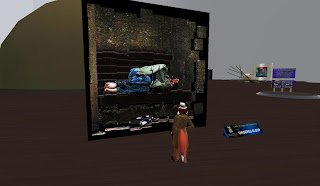 In the Non-Scripted competition, first place went to “Shattered” by Ginger Alsop, whom was awarded a 15,000 Linden prize. Second place was awarded to “You Can’t Touch Heaven” by Paleillusion Resident, who recieved 10,000 Lindens. Third place went to “99%” by Harter Fall, whom took home 5,000 Lindens. Harter spoke, "Receiving this award is such an amazing honor. I never thought I would win this prize, especially with such an political installation. I think even the rich ones of us understand they don´t belong to the 1%."

The Peoples’ Choice Award went to “Small Piece of Hell” by Rebeca Bashly, " I am very surprised and pleased. My goal is to make people happy with my pixels."

In the MachinimUWA 4 competition, the winner was “Welcome to the Other Side” by Tutsy Navarathna, “Many thanks to the organizers. UWA competitions are now setting the benchmarks for the creation of Visual 3D and Audio-Visual media in Virtual Worlds.
I am very proud to be part of this adventure! UWAMachinima IV is a great achievement in terms of the number of entrants and the high quality of the films being produced. In only three years or so, machinima filmmakers have emerged as an undisputed artistic force in Virtual Worlds...And this is just the beginning! Thank you, all.”

Tutsy recieved a 60,000 Linden prize. His machinima can be seen here (Not Safe For Work): http://www.youtube.com/watch?v=dm4XY49gdzc&feature=player_embedded . Second place went to “Artwashers” by Friday Siamendes, and third went to “Art of the Artists” by Fushia Nightfire. They recieved 40,000 and 30,000 Linden prizes respectively. The Special Award for Emotion went to “Yeah” by Hypatia Pickens, and the Special Award for Breaking the Barriers was awarded to “Transformation Virtual Art on the Brink” by L1aura Loire/ Dr. Lori Landay.

Lori spoke, “My film suggests that virtual art can be seen as a step towards what augmented reality might bring to art experience in the future, but as usual, I explore that idea playfully, with a wink at questions about how imagined, created, and actual realities intertwine, and what it might mean to break the barriers between them. It is a privilege to explore those connections with the artist communities of Second Life, especially as we've been brought together by the UWA.”

When awarded fifth place in the Non-Scripted competition for “Marionette,” Haveit Neox commented, "The UWA Art Challenge 2011 comes to an end, but it's left its imprint grid wide for the artists of SL. Jayjay conceived of the challenge, and against all odds in an otherwise scattered Second Life, he managed to nurture an expansive and stimulating place for artists to congregate, share their work, discover each other, and further their visibility in SL. An impossible task, unless you happen to be Jayjay. I am grateful for this award. My thanks to Jayjay, FreeWee, and all those who made the UWA Art Challenge a reality."