About a month or so ago, I was pointed at the in-game game known as Tiny Empires. It's a simple turn-based hud game where you, in the role of lord and liege, need to gain land and gold (usually for a lord and liege that you're sworn to). The more gold and land you gain, the higher in rank you achieve. 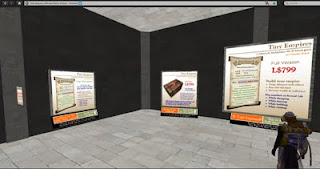 You start as a Wanderer, and can advance all the way up to Queen or King of your own kingdom. As of this writing, I was a few acres of land shy of Prince; I've got a LONG way to go before I make King --- I have a gold amount in the hundreds of thousands; most of the Queens of the kingdom I am in are well into the millions and -make- millions per turn.

The first thing that I saw upon playing is that in order for you to get subjects of your own (or to swear yourself to a liege), you need to find a player who also has the hud attached --- all subjects and lieges in the game are other residents of Second Life. Then you stand near them and when a turn passes, the opportunity comes up to become their liege or subject (depending on rank). This can be good if you're social and hang out in a lot of social areas (where there might be many people playing at once, but if you're a social recluse like myself, you might have trouble finding a liege or subjects. Fortunately, there is a Tiny Empires Recruiters group you can join in order to look for other players. 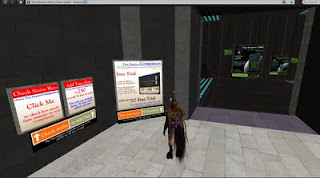 The game has a trial period, after which you'll have to pay 800 $L to get the full version. For another 600 $L after that, you can upgrade to the Federation version, which offers a LOT more options (The Alchemist, a Festival every now and then, the ability to form Alliances with other players, and the Path to Royalty among them). You'd need to upgrade to the full version first before buying the Federation version, however.

During the game, the hud often will pose a "vote", or an event will happen that gives you gold (a "gold windfall"). So far there aren't any events that I've seen that drain gold (except if you bet wrong on someone during a festival). If your vote is in the majority, the Emperor will give you an amount of gold (and sometimes a kitten, I guess he's a cat person). Gold gained seems to be in proportion to the amount of land you hold; the more land you have, the richer you get.

Sometimes the Trader will show up (again, price of his item is based on land), and other times the Alchemist will show up ("The moon shimmers with a red glow") so if you somehow earned an item known as a Gold Bar, you can trade it to the Alchemist for a potion of some kind. Some potions grant gold windfalls, others protect you from "sabotage" (where another player damages your land and you lose up to about six or seven acres, and it can rebound against you!), and still other potions could get you more land the next time your Liege grants a land tract to all of their subjects under them. 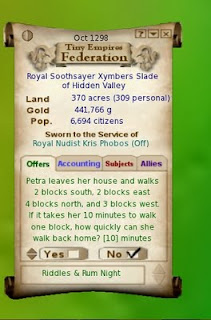 After playing it for a month, I've found it's addicting enough for me to keep playing because I ended up in a group with a lot of nice people in it --- you can meet a lot of new friends this way. There are not a lot of events or variations of the vote, so you'll see a lot (and I mean a LOT) of the same stuff. It's also exponential --- the more you buy land, the more expensive the next acre of land is and the more expensive other things are as well. At the time I write this, an acre of land costs me 537,000 gold and the next one will be even more expensive. I think this game has the serious potential for improvement if the Emperor (Ultralite Soleil, the man behind it all) finds time to code in more features into the hud.

One thing made me think. What's to stop someone from making a lot of alts and using those as subjects and allies, padding someone's gold and land stash? I asked Ultralite Soleil this, and he basically said "Nothing's stopping people from doing that, but it ruins the spirit of the game." I like his honesty about that; rather than fight a losing battle against billions of alts, admit it's a problem and that if people want to do it that way, then fine. :)

I'm going to give the game Four Dragon Hoards out of five. It's fun enough to keep playing even if it is a bit on the repeating side. You can find it at the Kitster sim (149,42,53) and the $L cost is well worth it. There is also Tiny Empires 3000, which is essentially Tiny Empires in a space theme instead of medieval one.