While out visiting Caledon the other day, one of the residents got into a huuuuuuuuuuuge dragon, larger than even the Seawolves I've written about before (not much bigger, but it WAS bigger). It looked like something out of the Isle of Wyrms (same visual feel at first glance, anyway), and after engaging the avatar's owner in some dialogue and doing an object profile to see who made it, headed to the EQuality and Teagan sims to have myself a look. 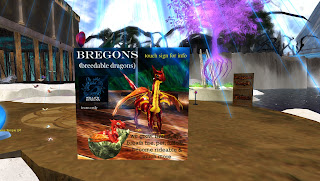 What I found were the Bregons, which are small breedables of the same kind of breedable thing that everyone seems to be into these days. I knew there were horses and rabbits out by various makers, it was only logical that the fire-spewing beasts of lore were not far behind. I've never understood the thrill of having breedables, as they're usually physical objects that aren't (in my opinion) animated very well and lag down the sim that they're on. Then again, I fell for the My Little Pony craze earlier, so it's pot calling kettle black. :)

The Bregons are listed as being able to grow from hatchling to breedable. All you need to start is an egg and some "food", both purchasable from the sim the Bregons are sold. After clicking on the egg, it hatches after a given amount of time (I have not experimented with it) into a female or male with a 50/50 chance of either. As long as the "food" is close by, the dragon will continue to grow from hatchling, to baby, to youth, to adult, to breedable. As the Bregons I saw roaming the sim were all the static, moving-in-spurts-poorly-animated variety (Four-legged non-avatars are not SL's specialty, it's the same reason I have yet to see centaurs done well) and I remembered from my early days in SL how much I didn't like what breedable dragons there were at the time, I was not interested in them too much.

The notecard I got for the Bregons says that it takes 12 hours after a dragon hatches (with "food nearby) to become a Baby. Babies come in 135 different random skins, 115 different eye textures, 34 spike textures (with 4 main different shapes), and 60 different wing textures. All generated randomly, therefore the chance to get the same one is very low. I went down the notecard and it looks like there are various "types" of Bregons: A, B, H, and J (with sub-types A+, B+,H+, J+, A++,B++,J++, H++, and 6 queens). What followed was a lengthy list of what happens when you cross one breed with another, which made me think of some kind of genetics chart listing -all- possibilities. Well-thought out, at any rate.

After the baby hatches, it takes 5 days to turn a baby dragon to a youth. Then another 10 days after that, from youth to adult. After that, -75- days to go from Adult to Rideable and Eternal (20% chance; Eternals don't die). The food bowls only last fifteen days, meaning you need to buy more in order to make sure the dragon grows to full size. They stop growing if they run out of food (I don't know if they can die, but I did not test them out on my own as I am not going to spend all that time waiting for them to grow). 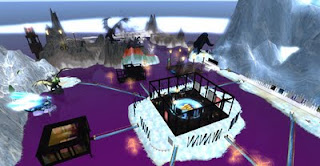 With timers like that, I am wondering why one would go through all the patience required to get their very own breedable dragon, when there are already many breedable avatars out there (both the Seawolves and Spider Productions dragon avatars have rezzable saddles, for example). I asked the sim owner (ED Exodus), and he said "The whole point of doing them was for fun really, but I was shocked how huge the breedable market is in SL and how fast it grows. I agree with you that getting an av dragon that you can ride will be much cheaper, but I can say 90% of the people buying Bregons are not looking at them as a rideable dragon... more than just a way to do business and money."

The Bregons also have a "breeder" (which I think is sold separately, as I didn't stick around long enough to check), which naturally requires a male and a female Bregon to be close to each other in-world in order to "breed" and produce a new egg. The Bregons are labeled to be transfer, from eggs to full grown rideables, so that is definitely an unusual way to start up a business breeding different eggs and trying to catch them all, so to speak.

While camming around the sim I came across a Staff of Jewels. Apparently if you have the staff (500L) rezzed, the dragons generate points toward free Bregons products and merchandise. I could see an idea like that being very beneficial to several other businesses. I also came across a series of one-time-use jewels (100L per Jewel) that enable you to change the look and appearance of all Bregons in its radius in various ways (different jewels for wings, spikes, etc). Naturally, a hud of some kind would be easier, but sims ain't going to support themselves on their own! ;)

I'm going to give this a guarded Four Dragon Hoards out of five. This guy obviously put in a LOT of work to make these two sims work into a bustling business (he did say he was surprised by the way the breedables took off in SL). He is obviously Doing Something Right. Breedables in general are not my thing, but if you're into the breedables, then visiting the EQuality and Teagan sims, where these things are sold, might be something to check out.