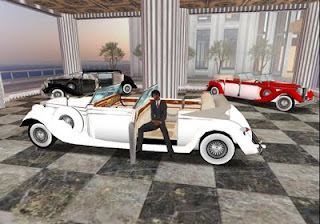 In an impressive showroom with glistening white and black tiles, an inviting red carpet and the latest luxury motorcars, you will find Yorba Naidoo. Dressed in his best business suit, he will introduce you to everything your heart desires in a quality automobile.

Packard was America's Rolls Royce, beginning in the 1900's. Naidoo fell in love with the line after attending a car show as a child. "It was all about quality and that's what I have tried to be inspired by ... or as much as 32 prims per car will allow me," he joked.

He joined Second Life two years ago, wandering around the many communities until he met Monica Weir of Weir's Way Commerce. She took him under her wing and taught him how to build. JonyBlade Codesmith, with The Guided Tour Company, does his scripts. 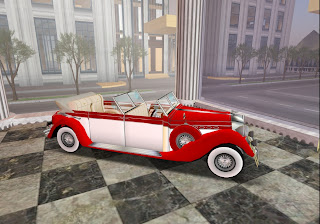 "Quality is in the eye of the beholder. I would say, once I had built these models in the early fall of this year, I felt like I had accomplished something I could be proud of and they started selling well," he explained, while adjusting his tie. He admits that patience isn't one of his strongest traits, but you wouldn't know it when you see the exceptional detail of his models.

Beginning with a picture of the actual automobile, he will start the building process and change the car as he goes along. The first model in his line was The Black Monarch Imperial Limousine V12. It's a sleek ride that's the cat's meow. "It took one month of hard work," stated Naidoo, "It's the flagship of the Monarch DVG Brand. "Some parts, like a real life car maker, only have to be made once. Otherwise I rebuild to suit."

Monarch Motorcars' main showroom, located on the sim Mobilis has been in business for two months. A second location has been established in Chicago. It's straight down the street from the jazz club. His line features a handsome variety of roadsters to limousines, for the working man to the collector. You'll be sitting pretty when you pull up to your favorite club. The line includes a Monarch Imperial Cabriolet Limousine, a Wedding Town Car, 500HS Roadster, Town and Country Station Wagon, even a taxi cab for the working man. 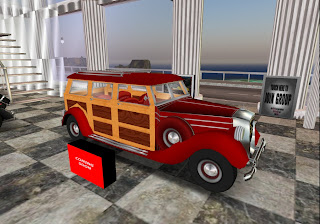 The motorcars are precisely designed, textured and scripted to enhance your driving experience here in Chicago. Getting married and looking for that special car to drive to your honeymoon? Then check out the luxurious Monarch Imperial with a rich white and beige interior, a texture change option "Just Married" sign and the Wedding March as an option. Seats three, all four doors open and the wheels spin when you drive.

The Monarch Snow Tracker and Police Cruiser are his newer models. One look at the fine craftsmanship of the luxury or practical working car and you'll know you made the right choice in selecting a Monarch.

"Building cars is my passion and seeing other people enjoy them is a huge thrill," he said with smile.

By Netera Landar
Posted by Bixyl Shuftan at 1:00 PM