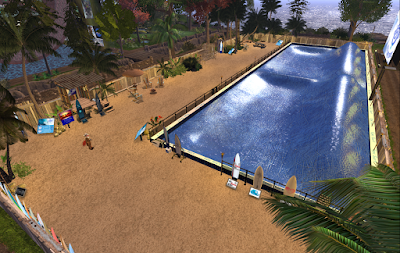 The events may have been over for a week, but the exhibits are still up. And there are a lot of them. One that got my attention was the "Epic Surf Center" at SL17B Stunning (217/33/23).

Unlike some exhibits, this one is interactive. The area has a huge pool in the middle, simulating a wave. To surf around, just touch the rezzable surfboard, and one will rezz. Get on it, and ride around for a while. You can also read information about the main location of the center inworld. 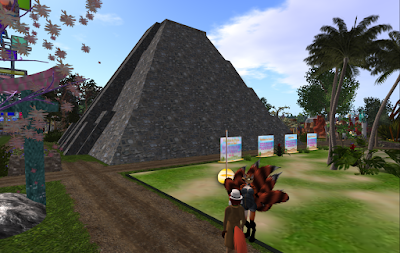 Another exhibit that got my attention was from the "Instituto Espanol SL" group's Aztec pyramid build. On the inside, one gets a lesson about Aztech mythology and it's beliefs on life after death.

Mictlan was the Aztec Underworld, ruled by it's Lord and Lady. It was a gloomy place reached by the dead only after wandering for four years beneath the earth, accompanied by a "soul companion", a dog which was customarily cremated with the corpse.

The journey from the first level to the ninth was difficult, and took four years. But the dead were aided by the psychopomp Xolatol. The dead had to pass many challenges, such as crossing a mountain range where the mountains crashed into each other, a field of wind that blew flesh-scraping knives, and a river of flood with fearsome jaguars.

Getting through one level of this underworld required going through one jungle in which the chests of the souls were typically slashed open by wild animals, and the hearts torn out and eaten by a jaguar. Talk about "eat your heart out." 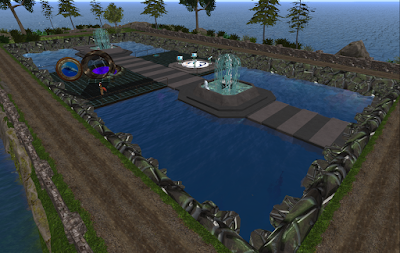 There was another water-themed exhibit that I thought was noteworthy, "Underwater Wonders" at SL17B Astonish (56/225/21)

As the waves gently rise and fall giving the air of calm, what could possibly like beneath? First, take a moment to learn about a few creatures from the sea and then stroll on down to the climate-controlled observation pod. Be sure to grab your free gift while there. Please watch your step on the way out! Actually, take a deep breath! Brought to you by creators Cynimon Catnap & Diamonique Viper on behalf of Vipera!

As mentioned, at one spot are displays to read up about some of the numerous living things in the ocean. There's also a pipe you can go down and port into a couple picturesque undersea area. One has a dance animation for mermaid avatars. Another has a free gift, a face and snorkel, that depending on your avatar may require some tweaking.

By all means, don't just stop at these exhibits. There are many more fun ones to explore. You have until Sunday July 12 to do so before they fade away into memory.