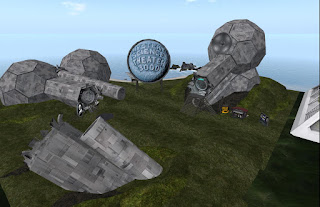 One of my favorite places that I wrote about in my first year of reporting about Second Life was the "Mystery Science Theater 3000" Theater. Over a decade later, the place is still standing. It's gone through some changes, and a change of owners, but it's still showing movies so bad, the real fun is either watching Joel, Tom, and Crow poke fun at or "riff" them, or doing some of the riffing themselves.

For those who don't know, "Mystery Science Theater 3000" was a comedy show on television in which the "plot" is of a man, sent out into space by a mad scientist and made to watch B-rated movies as part of an experiment to see just how terrible movies have to be and see in how much of a quantity before watchers go insane. But their subject keeps his sanity by poking fun at the flicks, or "riffing," alongside robots that he built, the two shown most in the movie being Tom Servo and Crow. The show ran on the Comedy Central channel from 1991 to 1997, and the Sci-Fi Channel from 1997 to 1999. After it's cancellation, the show continued in reruns for years, and eventually in Second Life. More recently, there has been interest in reviving the show for a run on Netflix. 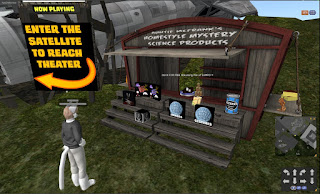 The theater was originally at BlaksleeWorld and owned by Squeebee Wakawaka. But it was moved to This Island Earth, the sim not the movie, and has apparently been there since. When the Newser looked at the place again in 2014, it looked more like a conventional movie theater than the "Satellite of Love." But it's current look is closer to the original, only it's broken in three pieces with the action in the front section.  Besides the theater is a freebie stand with a number of items up for grabs. These include t-shirts, gestures, and a "free steaming pile of sampo." What "sampo" is, I have no idea. The back end of the ship has a store. 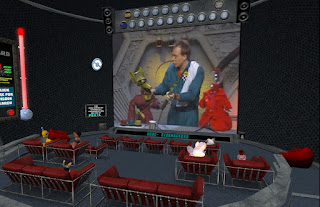 The theater room has seating for a number of people. You can see the movies only if your media button is pressed *and* you touch the screen. Otherwise you see a picture of a cheesy black and white sci-fi movie with the caption "People of Earth, Click here." Among the people in the audience was Peril Klaxon, the new owner of MST3K.

Peril told me the theater plays movies every day, "If one isn't playing, you can pick one and start it yourself." As to how she ended up in charge, "I've more or less ended up with the place by accident.... I hung out here enough to be one of the Mads, the regular hosts....and then the original owner sort of disappeared, and didn't want to deal with updating the screen we used back then. The old screen used Quicktime, and when SL nixed Quicktime, it broke the old screen. I just happened to be the only one of the remaining hosts that new enough about scripting to build a new screen. (grin)" This was about two years ago. 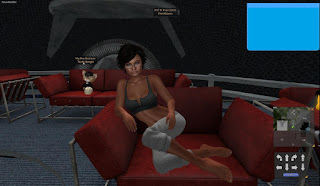 Rebuilding the whole place wasn't an easy task for Peril, "...it was bits and pieces.   The screen was the most work, but I redid the whole build about a a year ago, that took about a month. Of course, it's never done, I'm still adding stuff now and then (grin). And I've rebuilt the screen at least three times, as I learned things. All because I couldn't give up the social aspects you get from watching the show with other people. (smile).

So what are her favorite movies to poke fun of? "I prefer the episodes with giant monsters or luchadors.(grin). ...We usually get 6-8 people here for event nights.  It's been growing a bit since I started putting notices int he SL event listings.  And since Archie put his stargate link next door. (grin) Oddly enough, our most popular events are Tuesdays and Thursdays.   We did weekend events for awhile, but they were usually empty." 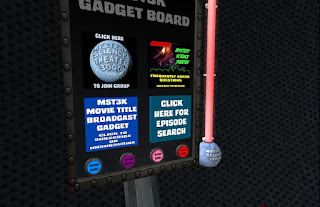 And which movies were the most fun to poke fun at? "They love the ones that are particularly cheesy.   Bad Sci Fi movies, in particular. Everybody loves 'Space Mutiny.' And we like to talk about ;MANOS;, as it's probably the most famous MST3K episode....but that one  actually can be pretty dull. The other big ones are Hercules and Gamera movies."


"The reason I've managed to hang out here for ten years and not get sick of it, even though we have hundreds of episodes available, is because the people who hang out here are great. MST people are my people, so rather than having to find friends, they all just turn up here and introduce themselves. (smile)."

So if you want to laugh at a turkey, head to the MST3K Theater.