A Look At Linden Realms 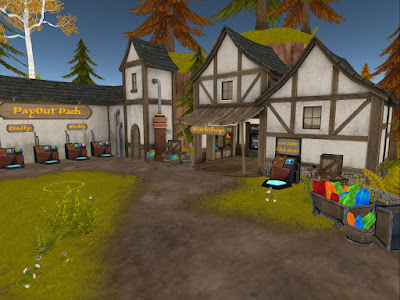 I don’t know how many of you have tried the new Linden Realms game yet: 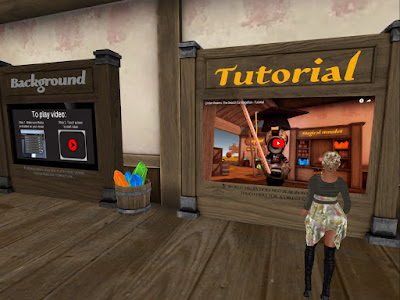 Bixyl gave it a try, so I decided I would too. I loved the old Realms. I started doing it years ago when it appeared and kept going occasionally over the years when I had time. I knew those hills and hollows and waters like the back of my hand. I had run over every inch of it. I was actually friendly with some of those rumbling grumbling Rock Monsters and used to push them if they got stuck. I liked the cavern and learned to avoid many falling rocks by running along the edges . I tried the glitches game but just left that alone and went back to chasing crystals. Oh, memories. 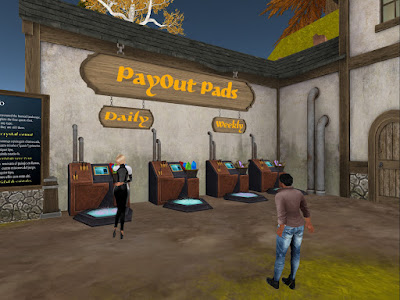 So , off I went to try it out. Change number one was a shock! Instead of qualifying to play one time by completing Tyrah’s quest in the realms, now she wants you to qualify every week by re-completing the quests! And, let me tell you these quests are infinitely more complex that the old ones. Before you even try the game read all you can in the wiki ( link above). Watch the video at the workshop on arrival. Inspect the rules in the workshop. Practice running. More than that, practice jumping... a lot! Learn to read signs on the run. Learn to stand in a safe place, as the resurrection circles are called now. Never hang out in a bush .Start collecting crystals, just run through them. Then begin your journey on the pathways that guide you to each part of the quests . You are facing many challenges. 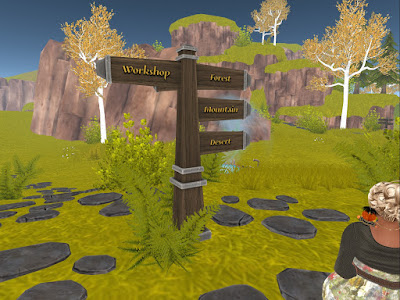 The moles did this! Much as I loved the moles and celebrated Mole Day at Bay City every year. I planned on some sort of retribution after I had spent a few days there, especially in the swamp!! I even warned some of them ahead of time.! Abnor, Ancient, Alotta and LR Linden too they were all in trouble!. Oh, I know other Moles were in on this too. I saw pieces that were made by Naughty, Magic, and other Department of Public Works members. 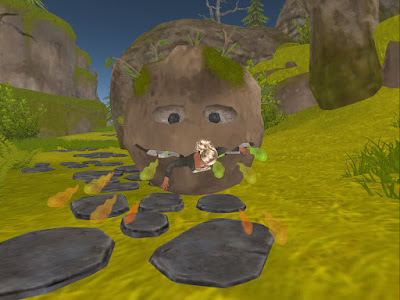 The first part of the quest took a little time but I completed it. I learned on the way that the new Rock Monsters, who look so cute and goofy, are horrible things. After getting to know them intimately I know they need dental work and eye drops! No wonder they chew so long. They grab you from 5 meters away sometimes. Once they set their sights on you they do not give up. The chase is on. They even jump off cliffs to follow you if you try to avoid them by diving over .Then they chew and chew and belch you out . Yuck! Take heed! To me they sound like corn popping . I think a sim line stops them, as well as any safe place.

As I went along into nooks and crannies of the new realms I found remnants of the old Rock Monsters, one in water, one embedded in the cavern walls looking so forlorn. There are few pieces of the infrastructure sticking out of the ground here and there ,just to remind you of the good old days I guess. Regardless, I found my first amulet part in good time as I followed directions and learned where to go and what to look for. 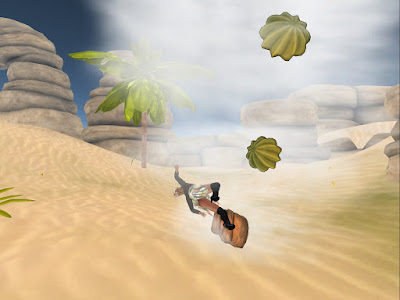 Quest two,the desert with new horrible experiences: getting caught in a whirlwind is the worst and really takes care to get by one if you see it. Wearing the goggles that you must find and use  is not easy but they are so helpful. Mouse look  needed but keep looking around for monsters. Finally I saw the amulet part and grabbed it. 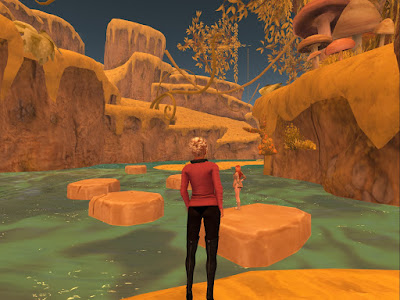 And then, the Swamp. I spent five days in the swamp! If you cannot jump and control your jump you are in deep toxic trouble. I would have quit then and there after the second day if a friendly avatar who shouted “Go Go!“ had not listened to my wails of agony and frustration and given me courage to go on, Mak (Makkie Riegler). Finally I got to that piece after gallons of poisonous water!!

I did leave there with the idea in my head that nothing could be worse than the Swamp, even though Abnor Mole had sort of warned me. Wrong. Ancient Mole has created something even worse. The Mountain is the last part of the quest. All the dire circumstances and experiences of the other quests are surpassed in the journey at the mountain. I tried running along the walls as I made my way into this new Cave Labyrinth to find Magellan and the final amulet piece.  Sometimes it worked and sometimes it did not. Back to the entrance more than once! This is a long road with so many obstacles. It is a dark and foreboding place. Magellan is long gone when I did reach his suspected location. But he left a hint. 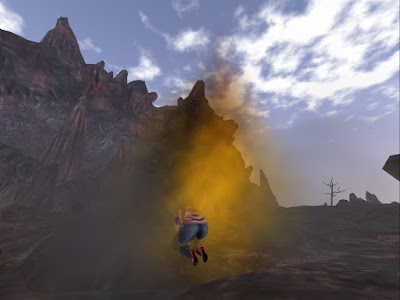 There should be blue crystals everywhere on the mountain just to get you into the sim, I was almost glad I had all that jumping trouble in the swamp. It guided me at the end when I needed it most in the burbling lava pits where the last amulet piece was visible as I tried over and over to reach it. I did! 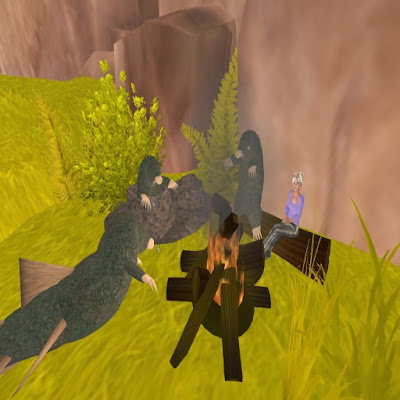 When I was having all these experiences( and many more you will discover ) I was sure I would never do it again and just wanted to finish it one time to say I did. Well, after a day of rest and reflection I realized, hey, I did it once I can do it again.

And I did! I was able to encourage another avatar, Natalina, so she would not quit. It is satisfying to be able to collect crystals and turn them in for lindens.

I still love the Moles. If not for them our second life would be pretty flat  and the oceans and waterways empty. I sat down to apologize and let them know I am still on their side. No rocks in snowballs at the snowball fight.

Portal Park is where you begin your journey to the New Realms.

Gemma Cleanslate
Posted by Bixyl Shuftan at 6:00 AM