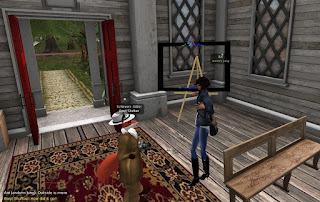 A couple months ago, Gemma Cleanslate wrote about a photography exhibit by Anibrm Jung. Recently, I had the chance to meet up with her. We met up at the Little Red Door Chapel Gallery and Retreat, where she has an exhibit. Anibrm told me the exhibit had opened July 8, with about twenty people being there are the start, "I was really surprised about that many people."

So how did she find out about Second Life? "Ohhhhh long time ago," Anibrm answered with a smile, "I was curious about it and never left. 2006 I started." Of her first days, "If I remember well; I felt lost, but on my second day I met Lorenzo. This guy stayed with me my whole Second Life. He showed me around. ... In that time I met some great friends. Second Life was different than. It was more a community. Nowadays it is like real life. Everybody for there own. I think that is a sad thing. Second Life needs a place for people to hide, run away too and be themselves and meet people and become friends without any obstacles." She felt there has been less community spirit lately, "SL became a business instead of a community" 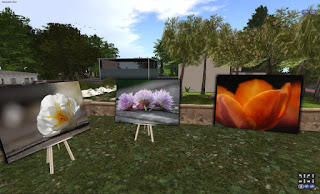 When arriving, a notecard handed to me automatically by an auto-greeter informed me that Anibrm in real life was a real-life "award-winning photographer for her sensitive and vibrant portraits of nature's works of art," using a Nikon D60 digital camera. Asking her about it, she referred to herself as an amateur, "It`s a great hobby to have." I asked how she got the idea for displaying her work in Second Life. She answered, "That has been some years ago. This friend I talked about asked me to show my photo`s in SL. So I did (smile). He made a gallery and I showed my photos. (I) Didn`t expect any one would come to have a look at them. But they did, and even (bought) some." The exhibit at the Little Red Door Chapel Gallery, Amicus curiae (134, 161, 24), will be up until the end of July. 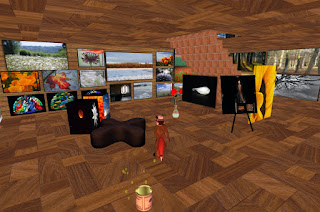 Asking her about the other location she had pictures, she told me, "Graine Macbain offered me her gallery for showing my Art for a long time now. She is awesome for doing that!" The Graine Gallery and Riverside Cafe is in Blue Curacao (29/44/23)

Noticing she was carrying a satchel, I asked if she carried her camera in anything like that in real life. She warmly told me she had, saying she had been looking around Second Life for one just like it, and had found this only two weeks ago. 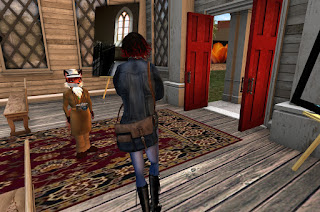 For now, Anibrm has no further plans for showings of her work, at least for the time being, "I had a lot of exhibitions in here the last three months and had my plot at SL14th Birthday. So for now this is it. That a love Second Life in all it`s way, but I think the Lindens are taking to much control about it, which will lead to a competitive SL. Where business is more important than fun, shelter, friendship etc." She thanked the Newser for it's coverage of art and artists, "I really like you doing this for artists in Second Life!"