Two of my fishing friends were having a conversation one day during a contest that caught my attention. They were discussing a new inworld game that is called Pokemonsters. (sound familiar?) I intruded and my friend Emily began to explain the game, and then after the contest took me to the headquarters. I was able to pick up a free hud, information and directions on the game, and get to see the explanation posted on billboards. She then showed me the Pokestops, where, by clicking you get aids to the game,….. apples, candy and pokebawls to help with the capture of the monsters. I was almost overwhelmed by that time so decided to read and take my time absorbing and understanding the hud and the extensive directions. I next visited some of the locations of Pokemonster stops just to check them out and collect some the aids,(apples, pokeballs, candies )to aid in capture. I then felt ready to try and go after those little monsters. 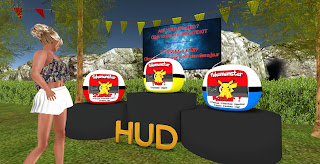 What a riot. It is not easy to get those little guys. First you have to get them to look at you by giving them an apple ( clicking them). Then you go into mouse look and start bombarding them with pokebawls, quickly!! I feel like I was hitting them square between the eyes but kept missing. or, worse yet, they run away! Then I had to find them or another one and start all over again. I began to have success! I have spent about two weeks running around the grid chasing after all kinds of little monsters. They are cute! The creators of this game, Addict Algoma and .۰Ʀεოs ۰. (Rems57 Resident) have spent a long time working it out to the the stage it is now but are continuing to perfect what is done and look to the future with new ideas. 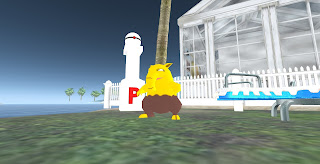 There is so much more to find out about too. Each monster has combat points. They are capable of fighting in an arena. The lesser point ones you can capture and then transfer and gain more candies.  I heard the arena is one of the things that they are working on.  There are a few pokestop places that have a lot of little critters running around that are not pokemonsters which can trip you up trying to capture them. The monsters make a cute little sound in their own language that will help identify them. They also wiggle, bob and weave which helps to locate them, but then makes it hard to catch them. I have finally become pretty good at doing that though . 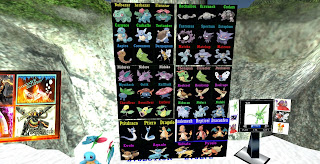 The hud you wear has a book on it where it tells you what monsters you have so far. I have saved some of the best combat points in a pokemonster saver that you can also pick up for free at the headquarters and rezz at home. I have also evolved a couple by depositing them in the machine at the HQ . This changes their appearance and also their combat points and cost you candy to do.  Many people sell their high point pokemonsters by putting them in a box that is also available there. There is still a lot more to learn about this complex game but I wanted to let you know all about it so you can go try it yourself. I need to get an egg and I know I can incubate the egg and will see what I get.
As you catch more monsters you will rise to a higher level that you can see on your hud. The pokemonsters are really cute and interesting creations.  I have met quite a few addicts so far in my travels around the grid, some playing the “similar “game in real life. Go try it! You can start here at the headquarters and the owners are helpful and there is a group to join that is also helpful with problems. You will also enjoy seeing different locations on the grid where the Pokestops are located. I did. http://maps.secondlife.com/secondlife/North%20Island/35/193/1002

Gemma Cleanslate
Posted by Bixyl Shuftan at 6:00 AM