Recently on the official Second Life Blog, Linden Lab announced the creation of an area to inform residents about "skill games," Gaming Island. They called it a "region dedicated to educating Residents about skill games in Second Life." Deciding to see what exactly the place was like, I went over to check it out. 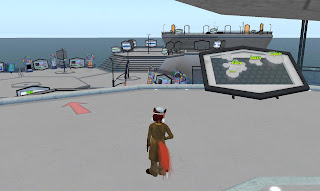 To begin with, it used to be that games which were outright gambling were available to play and common in Second Life. There were virtual casinos in Second Life in which people could play blackjack, poker, roulette, slot machines, and more. But in 2007, Linden Lab banned gambling on the grid, saying there were laws against it on the Internet. And the games and casinos vanished. Some time afterward, new games such as "Zyngo" appeared. The makers claimed that some degree of strategy was involved, and play did not rely entirely on chance. Despite their similarity to gambling machines, Linden Lab allowed the games, although could and did demand changes in a game's internal programing. Some residens saw little difference between these games and other forms of online gambling. 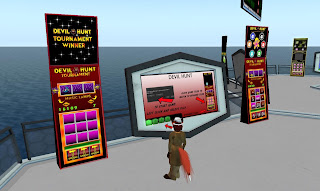 In July 2014, Linden Lab updated their policy on "skill games," saying they could only be in designated areas of which the owners had applied to the Lab to house them and pay fees. The makers of such games also had to be approved by Linden Lab and pay them fees as well. Critics charged Linden Lab was trying to squeeze a few extra bucks from the residents out of greed out of an industry of which the legality was based on technicalities in the law. But a number in the business paid the fees and a number of residents continue to spend Lindens on the games.


As it turned out, there is more than one "Gaming Island" on the map, Gaming Island and Gaming Island 2, presumably in case Linden Lab anticipated anticipated a large number of residents checking out the place. A third, Gaming Island Build, was blocked when I tried heading over. Heading to one, the area is made up of a welcome area for landing on, a "Play" area for the games, a "Learn" area to find out the basics of the Lab's policies on the games, and a portal area to one of several gaming areas. 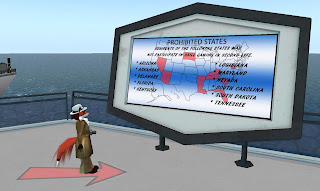 There were several different kinds of games there, all in "free to play" mode. There were instructions nearby explaining how the games are played. I found the games rather simple enough. While they offered a prize for getting to a certain score, I never did reach it in any of the games.

The "Learn" area was were the policy of Skill Games was explained in brief. The definition of a Skill Game is describes. Another sign mentions the eleven US states where residents living cannot take part, which ironically includes Nevada despite it's gambling mecca of Las Vegas. 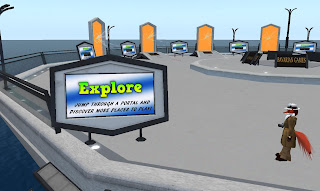 The last place was a portal area which would teleport residents to one of several areas with skill games. For some reason, PI Games, which did have machines in the "Learn" area, did not have a portal leading to their place. In the past, PI Games temporarily closed and halted operations of it's machines due to Linden Lab but has since come back online and their gaming hall is up and running.

Despite the controversy, it seems unless there are some changes in the law, Skill Games will continue to be a part of Second Life. And it's up to residents to decide whether or not to play. Just keep in mind in the long run, the House always wins.