Nu’Ville Will Haunt Your Soul 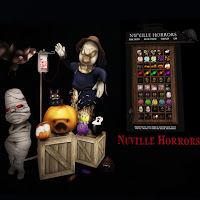 During the month of September I was immersed in the Arcade Gacha Event, because I was trying to complete sets of items that I liked. My favorite items of all are the OhMai Spice Jars and the Teacup Piglets, both of which were created by Anya Ohmai. I also adored the Hamster avatars that were all the rage in the last September’s Arcade Gacha. These pint-sized marvels were created by Suetabulous Yootz, the owner of Beetlebones, who, it turns out, is the real-life sister of Anya Ohmai. Together, they have teamed up with a scripter named Biblar Heliosense to create the Nu’Ville Horror sim. My guess is that they had planned to role this out for October and Halloween, but if you still feel the need for a scare, and some amazing gifts, head over to Nu’Ville. 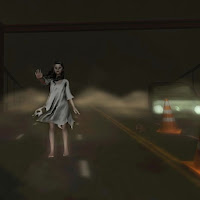 I have no connection to these creators; I only wish I did, the things they create are things I want. Nu’Ville is not a free sim. For a 24 hour pass you will have to pay 100L, and for 800L you get an unlimited pass, and group member gifts throughout the month that the sim is open.

This is not the first time that this kind of pricing has been used. MadPea has had several events for which an entry fee was charged. I am not adverse to this if I believe there is value in the event. I never hesitate to pay the shocking entry fees to the Musée d’Orsay in Paris, because I want to see the art. The work of these sisters is art, and worth the charges paid. Plus, I got a bunch of items made by Anya and Suetabulous that I would have paid for anyway.

I paid for my membership in the group, because I wanted to remain unbiased in my views towards the event, and let my dear readers decidre for themselves.

What’s On The Sim of Nu’Ville? 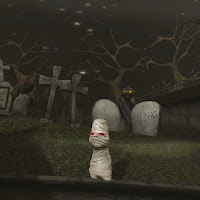 Once you have paid either for a pass or an unlimited membership, you can find your way to a bus stop where you embark on a ride through scary, dark and foreboding Nu’Ville. The bus drivers offer commentary along the way, as their skeletal hands clutch the wheel to navigate through the horrors. If you press your Escape key your camera will point in the manner intended by the creators, and you will see the gates of Nu’ville open to welcome you. The cemetery on the right has a tombstone that reads: R U Next.

The bus ride takes you through the village of Nu’Ville and over a bridge upon which a car accident seems to have occurred in the fog. You wish that the driver would stop and pick up the girl in the middle of the road asking for help, but he’s just a bony civil servant, making his way along the road, and refusing to stop for passengers that don’t know enough to wait at a bus stop. Perhaps you can imagine what happens to the girl?
When you arrive at your destination, the bus drive and bus poof in a cloud of brown smoke, and you are left at the entrance to a huge apartment building. It is there that the hunt begins. 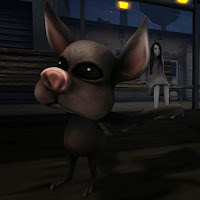 I don’t want to give away too much, so I will tell you that Anya and Suetabulous have filled this apartment building with gifts and prizes that are as much fun to have as they are to find. It took me a few times to gather all the prizes that are shown on a HUD given out for the hunt. Some of the better hunters finished quickly. I still haven’t found the rumored 13th floor as of this writing, but I continue to try. There are 50 prizes in all, plus extras along the way. In addition, residents who join the Nu'Ville Group will receive gifts throughout the duration of the event.

My favorite hunt gift is the bat avatar, that is the opposite of the cute, harmless little hamsters that were all the rage a year ago.

I am honored and amazed to tell you that I was able ato catch up with both Anya and Sue, and they agreed to speak with me about their work. I will present a combination of their answers below.

My aim in conducting these interviews was to learn about Nu'ville and to get a peek into the minds of these two creative genuises.

SL Newser: What was the inspiration for Nu'Ville ? 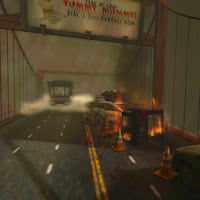 Anya & Sue: We have always dreamt of making a theme park/amusement park sorta sim, but that particular idea had been held and shelved for years now. We decided to do a miniature version for Halloween to see if we can even finish something smaller scale compared to our initial idea. The inspiration was mostly Disneyland's Haunted Mansion ride and it really spun off into something entirely different. It was meant to be an animated gallery of our work, but  most importantly, we wanted to build a theme park where Secondlife Families and Friends can spend time together and have fun!
SL Newser: What would you like Second Life residents to take away from their experience there? (Besides the great hunt gifts )?

Anya & Sue: We really want SL Residents to take away the experience and the ride more so than the apartment/hunt itself. The main focal point of it is to show a combination of passions - Sue loves meshing and modeling, I for one love texturing and Biblar (Heliosense) is a huge scripter extraordinaire. So with three of our passions, we hope to bring you an idea of the potential SL has in having something that just takes your imagination into another place. We wanted people to see the possibility of what mesh can offer when you combine scripts, sounds, lighting and animation together.
(ED Note: I have come back to the sim and taken the ride about five times now, so I guess the plan worked)    SL Newser: What projects do you have for the future ? 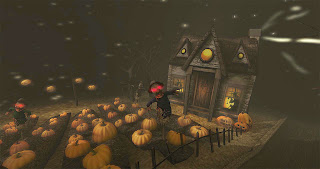 Anya & Sue: Of course, one of the projects would still be creating that theme park/amusement park idea—it'll be a sim called NuWiggles. We also are working on The Clove, which is a more realistic, beautiful sort of Tuscan village. The Clove hopefully brings back the malls and rentals we use to have in Second Life™.   For the Clove we are using an architect we commissioned from www.deviantart.com because we wanted to see what it would be like to collaborate with artists from different communities. We are also trying to create more places and items that would be fun and interactive for Second Life™ users.    SL Newser: Personally, I am always interested in the workflow people have. What tools do you use to make the enchanting objects you create? 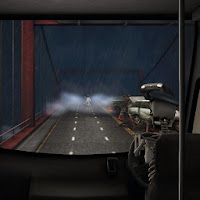 Anya & Sue:  We always joke around because Sue says the entire place is a walking Zbrush (from Pixologic) advertisement. That's really the main software we both use, but we do also dabble with Hexagon, Blender and Maya—oh, and how can we forget Photoshop?! Those are the main tools we've used for modeling and texturing. Most of our rigging is done using Avastar for  Blender (http://blog.machinimatrix.org/).
To speed up the process for some of our avatars, we actually used Makehuman that creates amazing base models. We bring those into Zbrush and touch them up. This time round Sue dabbled with Audacity for mixing sound effects that you'll hear throughout the ride.
And finally, Dropbox is our savior! We are real life sisters but we currently live in different parts of the world. So having Dropbox to exchange files is the best way to go. The work flow for us is always: 1) Sue gets the base meshes done,  and then 2) Anya finishes it with a texture. That has been the way we worked for several collaborations now!

Is It Worth It?

I am a satisfied customer. I have shown my avatars and transfusion bottles to many people, and they went immediately to Nu'Ville. I was impressed with how well the ride worked. The number of avatars is limited on the sim, the build mesh has been optimized to keep down lag, and the experience is so multi-sensory that you can almost smell the Vampire Chocolate Kisses.    Duration of Opening: Nov 2nd, 2013 (8AM SLT) - February 2nd, 2014 (12AM SLT)

DrFran Babcock
Posted by Bixyl Shuftan at 6:00 AM