On Sunday November 10, there was an art exhibition on the top floor of the Somnium Photo Art Gallery in the Greece sim. This exhibition was different as it was an artistic protest against Linden Lab: the C.A.L.L. Exhibition. C.A.L.L., short for Creators Against Linden Lab, had asked artists from across the Grid to make and donate works specifically for the show, "which property rights you will gladly grant on your own free will to Linden Lab." All the artwork was free for residents to take a copy, set for "sale" at zero Lindens, "as the content you have uploaded to SL is not yours anyway with the current LL TOS." 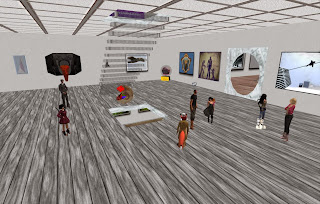 Dropping in, the top floor of the several floor gallery was full of the C.A.L.L. art, with several people there, including the exhibition host Walt Ireton. The artwork included "How to Stamp Out Creativity" by Em Larsso, a page with an international "not allowed" sign over it. There were a couple animated sculptures, "TOS Eats Art" by ChapTer Kronfeld, a "Pac-Man" like being that was constantly chewing prims, and would face whomever was nearby, and"The Copyright Monster" by Asmita, an ever-hungry tongue that kept flickering out, as if trying to reach for anything out there to devour. 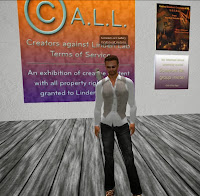 Walk himself had made and donated a peice, "Property of LL," which had a paragraph of statement freely donating his "content" to Linden Lab, with an outline of a man sitting on a toilet.

Among those there was Trinity Yazimoto, one of the organizers of the "United Content Creators in Second Life" group. A favorite piece of art of her, and others, was "Once Upon a Time," which was a few words next to a picture of a wilted flower, "this one is really meaningful." Walt called it, "this is technically very good - the title I find a bit misunderstandable. 'Take our creativity not our souls.' Well, actually we dont want our creativity to be taken. ... The picture is great" "I like that without any words," a visitor commented, "it gives a message." 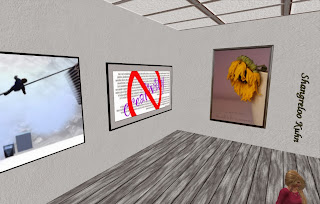 Another there was Chris Kayor. He had quite a few things to say in IM (most of which he gave permission to quote) and felt Linden Lab was out to tighten its grip over Second Life, both it's control and it's demand for money, "I believe that SL is indeed headed toward becoming ... pay to play," feeling basic accounts would soon no longer be free, and before long not only would third party Linden exchangers be banned again, but residents would no longer be able to sell Lindens back to the Lab, meaning the only ones who would be allowed to make real money from Second Life would be Linden Lab. And if longtime residents left, the Lab would not care, thinking they could easily replace them with newcomers.The UCCSL, while he felt was well intentioned, was in his opinion just being used by the Lindens to stall for time.

The exhibition will remain up at the Somnium Art Gallery until December 31st.