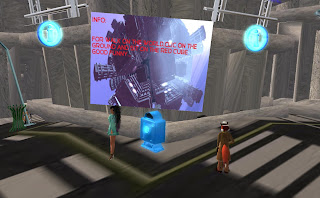 Recently in Second Life, SL Newser heard about an unusual place: The "Citysphere." The place was a huge globe covered with over a hundred buildings. While there have been huge globes built in Second Life before, such as Second Earth near NOAA, Citysphere was different in that you can walk all over it, even on the underside.

Getting to the location I found on the Destination Guide, there were a couple signs telling people to walk around, one in English, one in French. They just had to click on the ground, wait for a red cube to rezz, and then "sit" on it. Just walking about, one looks like they're floating about a foot over the place. Once you have the red cube, you can walk about normally on the ground, even on the underside of the sphere. 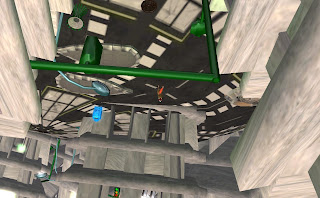 The Destination Gude describes the place as a "mind-bending experience" with "three times the surface area of most sims and must be seen." The notecard I found at the signs described "you will discover new sensations, as well as uncontrollable dizziness at the edge of intoxication." Going about the streets of the place, things certainly did take on a new perspective as I got close to the globe's equator, and moreso on the southern hemisphere. Different people will handle the experience in different ways, one Facebook poster describing herself as feeling nausea. For this reporter getting around took a little slower as my perspective seemed a bit disjointed, and moving in the right direction near the south pole could be a problem. 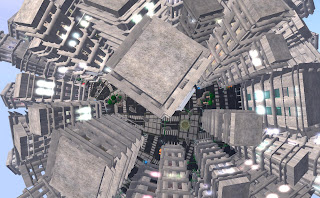 The notecard suggested similar spheres could be easily made with a different environments in mind, and with close to three times the surface area of a flat sim, "it is so a not insignificant saving of space."  The place was made by Freeloops Zanzibar, with Slove Mode designing the surface walking script. Others involved included Gizmo Tyrant, Loda Denfu, Coxigrue Borgin, Chikami Resident, and Abracada Dreamscape.