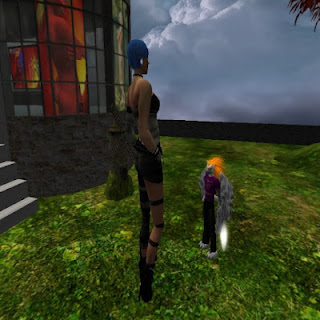 It seems like there’s a large variety of avatars in second life besides human avatars like we are in the real world. Furries have a wide range of real life and mythical animals to anthromorphize as. There are robots around as well like transformers or maybe an android or two. For the more spiritual I have seen some avatars as angels.

When I met with Ceri Quixote at her shop Quixote’s Dream at the landmark of the same name she showed me there are still ways to make your avatar unique in SL.  Her shop sold skins for women as different colors but that’s not what was different about her. When I warped to her shop my avatar at max height was maybe less than half her height or maybe a third.

Ceri Quixote makes Colossus avatars in Second Life. She told me she wanted to push the envelope in Second Life to what she could make with mesh which has been incorporated in SL recently with viewers like Phoenix and Firestorm. Her current avatar was just the tip of the iceberg. 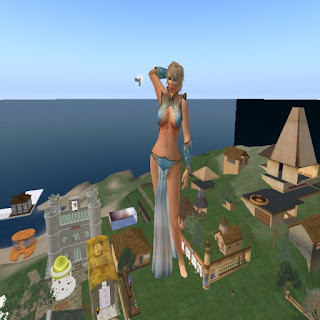 Ceri and I ported to a sandbox to see the main course. When she put on her avatar, she was a giant like perhaps a giant from jack and the beanstalk. My griffin self was a mere speck compared to her massive or gargantuan avatar. I was sure to take a couple photos.

I joked with Ceri that in addition to invading Tokyo like Godzilla she could easily pick up guys. She laughed at the joke. Also Ceri will make the large avatar for not only women, but men as well.

Sadly the massive avatar was not for sale. However the regular Colossus avatar will be on sale at the end of May. Ceri said she was still fine tuning the scripts and outfits for men and women.

I asked Ceri being a furry myself, does she have any furry avatars she would want to incorporate into her colossal avatar?

Ceri Quixote: I've always been partial to bunnies - the Kani avatar is one of the first I bought in SL. So bunny fans in the furry community will have an XL option soon. 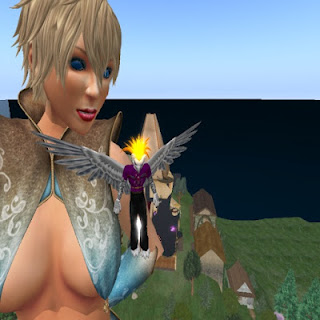 I asked, if I wanted to buy one what the price would it be? "1,500L" I said, that’s a good price. I paid more for a popular feral avatar.

I asked Ceri, what if she was tall like her super-sized avatar, what she would do?

Ceri Quixote: If I were that tall in real life? I'd probably travel as much as possible.

An easy feat if she was the 50 foot woman, like the B movie.

So if want to impress your friends with a cool new avatar and you’re tired of the same old furry or human or robot options. Be on the lookout for Ceri’s new look so you can step large in Second Life.

Editor's Note, Hamlet Au found this Youtube of the Colussus, by Deceptions Digital. There's also another by "OldMountainWizard."