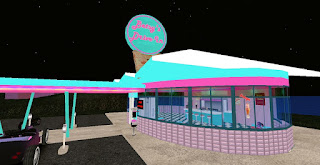 The Virtual Museum of Architecture celebrated the fun of 1950’s drive-ins at its Spring Build-off this year.   The two winning designs can be seen at Purdue University, Virtual Museum of Architecture (208, 113,26).  Mickey Wizardly won First Place in the Pro Division with “Betsy’s Drive-in”, and Toxic Darkmatter won First Place in the Novice Division for “Double T Drive-in.” 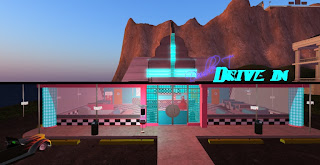 Both designs featured colorful neon signs and the popular 50’s colors of turquoise, hot pink and black and white checked floors.  Cars and motorcycles are parked outside, and “Betsy’s Drive-in” includes some “squawk-boxes”, too.   Signs from the 50’s, tempting malts on the counter, and a rock-n-roll tune playing inside the “Double T Drive-in” added extra fun and authenticity. 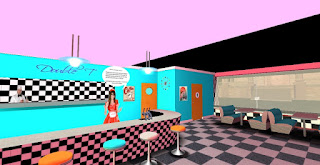 In front of each drive-in is the winner’s trophy, which was created by Doe Silverspar.  The trophy, entitled “Skating”, was the winning design in a mini-contest held about a month before the drive-in build-off.   I chatted briefly with Silverspar about designing and building in Second Life.  She has been involved with this activity since she joined SL in September, 2007.   She suggested that residents who are interested in building join Builder’s Brewery.  “They offer top notch classes constantly, and the classes are free,” she said.
Builder’s Brewery, as well as over a dozen other SL businesses, sponsored this year’s event.   Djinn Dasmijn was the Build-off Coordinator.