Behind the 8-Bit Area


About a week or so ago, I wrote about the 8 Bit Area, a place I thought was abandoned and was very pleasantly surprised to see that it had not. I went back and tracked down a pair of the main creators of the "new" area over in Electrobit City, Jei Desoto and Kris Spade.

Xymbers Slade: I really thought it was just going to be abandoned. It's nice to see that this was made. (smile) I see a lot of ideas for Mario-themed areas, but they almost never take off.

Kris Spade: Nah, we have high hopes. No worries about this being abandoned anytime. (laugh)

Xymbers Slade: I'll say, all this work for nothing would REALLY be a low point.

Kris Spade: Oh yes we know, been fiddling with all this stuff for a long while now

Kris Spade: Well it started with The 8-Bit Area, Jei can be more accurate on the timeline with that 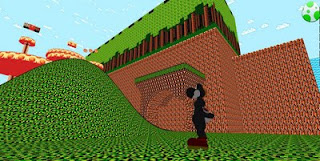 Xymbers Slade: What was your intent then and how did it change to what it is now?

Jei SCR-16: Our updates were so far and few in all that time while we worked (you could probably count them on your paw), so most thought it was abandoned. It was originally a game test. To see what LSL could do in a game engine term. But we thought it'd be nicer to have a more original flavor.

Xymbers Slade: Were you disappointed? I don't normally equate LSL with being efficient. Or functional.

Jei SCR-16: In the textures you see here, 90% of it is original and from scratch.

Kris Spade: As you might notice, being a visitor of the original 8-Bit area. This new rendition uses a lot more custom custom sprites and ideas?

Xymbers Slade: I noticed, especially the Goombas. Though I have yet to see any Bowser related quotes. What happened to make everything take so long? Just real life stuff?

Jei SCR-16: Real life stuff, and fighting with Linden updates that could sometimes cause rewrites in code.

Xymbers Slade: How long did it take to build all this in total? This must have taken months of careful planning, though to me it looks like it just sprung up overnight.

Kris Spade: Jei manifested The 8-Bit area well before we did what is seen here today. I only recently started working with him last year. This is now, a full sim playground, to exhibit all of the awesome 8-bit art/skills/talent.

Xymbers Slade: I'll say it's awesome. I was especially pleased with the working pipes; I hadn't seen those in any sim before. What is one thing you want to do, but find you can't?

Jei SCR-16: Holes and pits that can warp you to another world much like the 'secrets' in Super Mario 64. That would take a real force-teleport command. Many things beside that that are along those lines.

Kris Spade: I don't think we have reached and "roofs" yet. Just a lot of work to be done. What is slated next, is to make all of the "raw" areas more "engaging" in terms of play, and fun, any actually being a game in Second Life.

Jei SCR-16: But yeah as he said. other then that no real roofs. There's alternate things that can emerge in place of what 'can't' be done.

Xymbers Slade: Back when this place was in "preview mode" (in another sim), I tried flying in and found myself pushed down all the way to the ground. How did you do that? I was in my giant Seawolf dragon and came in from the sky and was forced to the ground. So I went "Hey, gravity!"

Kris Spade: The lack of teleport functions that SL offers is the biggest obstacle, but there are crude work arounds.

Jei SCR-16: That was the magic of Mortland. (big grin) Flight is wrought through magic powerups. Second Life flight is something of another world. (grin)

Xymbers Slade: It was a definite surprise for me, and something like that would probably be useful in other sims (if it's not already common knowledge).

Kris Spade: I am not sure if Xymbers is familiar with Mortland, but it's now an area here to look at.

Xymbers Slade: I did. I like that one pipe that has the changing perspectives as you're pushed along. Will there be an ongoing story line, and RP opportunities, in either here or Mortland?

Jei SCR-16: Yes. the gravity is not in effect, as I plan on a more accurate method that has less overhead.

Kris Spade: Actually, the answer to that is YES, for Mortland. Jei can elaborate.

Jei SCR-16Jei SCR-16 nods: What we'll do is expand the environments, and add a simple engine for RPG elements. While that's not uncommon in Second Life, we'll be doing it very differently. 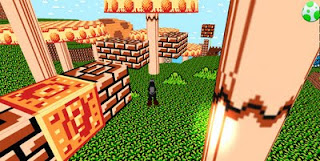 Xymbers Slade: It will be nice to be able to use my Bowser av in perhaps an RP setting. I noticed that some [?] blocks had mushrooms, that there were coins in various areas, and that there were Thwomps at the ready and Goombas wandering around. Are they for show or do they have a function besides being stomped on?

Jei SCR-16: Well, while it's not a "Mario Sim" it still has an inspiration that makes the fanship shine. So that'd not be a bad thing . (grin)

Kris Spade: Yes if you don't have a mushroom here, you can't bash the bricks. (grin)

Xymbers Slade: I was thinking a hud and coins could be collected to show up on the hud where you could buy video game related stuff with them.

Jei SCR-16: Though there are no immediate displays for the tokens, they are tracked. Mushrooms will allow you to break breakable blocks.

Xymbers Slade: What of the coins then? They're all over the place. (grin)

Jei SCR-16: We've planned a HUD for 3 years now... haha !We want to also make alternate ways of knowing so that HUD isn't -required- but just an advanced experience.

Xymbers Slade: I am just waiting for the invulnerability stars to be released... heh. With the advent of mesh, will this change the way the place works in any major ways?

Jei SCR-16: Well, as Spade says, without the mushrooms the bricks don't do much. The coins will be much the same. They will act as a game currency. It will be a more proficient version of what's here with more detail. Other things... will go unmentioned.

Xymbers Slade: Heh. Can't spoil everything, I know. I can envision fire-shooting gloves, hammers, or various other things though... maybe the mushrooms deform you to giant size. That'd be neat to see. What's the next big thing you have planned for here? More worlds/sims planned? A sim can only hold so much.

Jei SCR-16: It can. But I have two worlds with a few regions and barely shoot over 1k in prim count. And the function is all but sparse, but runs like a dream compared to many places (especially the mainland).

Kris Spade: The idea, is to create an interactive game, in SL... and offer a big "nostalgia" sense. You can collect objects such as mushrooms, objects, and THEN SOME when it's all manifested. Mortland, the other more "realistic" project will be more classic RPG based. Fun times ahead. You would be surprised what you can actually get out of a sim, when you think in X,Y,Z terms. Many people think in flat space.

Jei SCR-16: Yup. If we hit a roof, we might open an add-on region. It's just not necessary right now.

Xymbers Slade: Second Life has been around a long time, almost to the point where what can be made HAS been made. Do you see SL as getting "progressively worse" (as a lot of people do) to the point where things collapse and people look for new social platforms? That would mean all your work was for naught, not lasting very long at all if Second Life were suddenly on its last legs. Some seem to think it's on its way out.

Kris Spade: No I don't think that, I think mesh is a "big jump" for SL. People really need to think "outside of the prim" and use the resources offered in a unique way. We are not thinking conventionally. We hope to present a very engaging environment that is unlike the SL cliche. Lots of great times ahead ?

Jei SCR-16: I don't think any of the work here is for naught, because Second Life though not the FIRST of it's kind was the most innovative in idea, and will definately go down in history. If i were to make a world like this in another platform, this one will be not only remembered, but continued. The labs work to stay cutting edge to an extent. It looks bleak in some areas, but don't count the eggs before they rot. 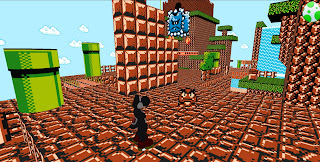 Xymbers Slade: If people have ideas for things, like items or a storyline or whatever that they want integrated, are you accepting "outside submissions"? I know a few people (me included) that would have a lot of ideas.

Jei SCR-16: Not at this time. But once it has more momentum, yes. The reason, is that a lot more (A LOT) is planned than what you see here. It has to be realised in a basic form before adding on newer ideas.

Kris Spade: Ideas and community are very important to us yes. While we have a fixed momentum on what we wish to do next, the feedback, and support from everybody who loves it is taken into massive consideration. Still on the "full steam ahead" mode, but we've had a lot of interesting people visit and we hope they will be part of the unique community here.

Jei SCR-16: Yeah. there will be a shelf for ideas... And we dust regularly. (grin) We just need to over come some hitches and things, so people can get a better vision of our direction.

Xymbers Slade: Well, I for one will definitely be interested in seeing what else ends up showing up here besides the Thwomps and the goombas. (grin)

Xymbers Slade: In either case, that pretty much wraps up the questions I had in mind, so I'll do another story with the interview and my editor should have it up in a few days. (grin)

Kris Spade: If you can imagine it, we're only using a tiny fraction of the sim's resources here. Lots of expansion on the way, and we love all of our visitors/enthusiasts and their feedback.

Xymbers Slade: I will, (grin), giving this place 5 Dragon Hoards out of five for sure (I did in the last article I wrote a couple days ago). Cheers. (grin)

Then I leapt into the nearby pit, being sent back to the beginning of the sim.
8-Bit Area II: You've died, and have been thrown from this reality!

Five dragon hoards out of five. Without a doubt. Go visit!