A grand re-opening of Toys Art Gallery was held July 17 and 18 at its location on Grojnowski (33, 19, 1001). The show is titled “Mirages of Art”. I wasn’t able to attend the reception, but I went over early to check out the new gallery. 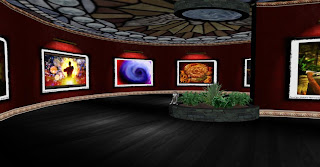 Toysoldier Thor is the multi-talented artist, builder, and designer who created the work. The gallery, which is said to have taken 5 weeks to design and build, is a unique, circular structure with a colorful walkway that winds around the 5 levels of gallery space. The top floor opens onto the Starfield Patio. Throughout the gallery, subdued lighting highlights the art work.

Unlike real-life galleries where touching is forbidden, Toy encourages residents to touch his art. He has created a notecard for each piece that explains his creative thought process, often provides the Second Life location of the photo, and shares other helpful or creative information. For example, his “Farm Falls Frost” was taken on the Alirium sim, located at Alirium (204,119, 22). He stated, “This is a place I strongly recommend my fellow SL'er must visit and explore. I wanted to express a peaceful abandonment of a home long since vacated and the view from a window of this home as the land around it overgrows. The arrival of winter is hinted with the frost on the few remaining panes of glass as well as no leaves left on the trees.” 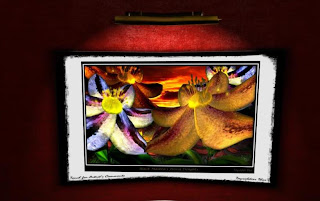 In contrast to this pastoral scene, one of his other works is “Stormy Streets”, an urban street scape from the sim Sin City – Hard Rock Park. He added layers of additional color and elements to the Second Life photo, including some elements taken from real-life. The result is a vibrant scene, with symbolism and danger lurking everywhere in this city.

One of my favorites, shown in the second photo, is “Black Mamba Floral Delights”. Toy created this as a collage from photos he had taken of the many flowers found on the Black Mamba sim and which he enhanced with Photoshop. 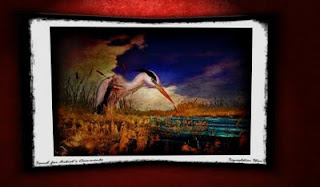 The last photo shows another of my favorites, “Morning Meadow Hunt.” Toy found his inspiration for this work of art at the Gulf of Loon. On his notecard, Toy wrote, “I ended up bumping into this amazing Crane (at least that’s what I think he is) that was hiding in the cattails actually hunting for fish - and even caught one right in front of me. I had to capture his morning meadows hunt onto digital canvas! After several photos of different angles and a lot of photo manipulation to set the tone of the day, this is what I came up with.”

Toysoldier’s other works are equally varied and complex. Some of them, like “Magi’s Realm,” depict the mystical side of SL. Other of his works, such as “Barren Harvest” and “Floral Fox” include images from his real life that he brings into Second Life. Toys Art Gallery brings such a wonderful variety of colorful, unique art to SL that you will want to visit it often.