A couple of weeks ago, free-falling from 4000 meters, I saw a skybox in the air reading "Garden of Dreams." It was a giant enclosed box with their logo on the side, and after slowing my fall enough that I could briefly cam in, decided to take a look at their creations. Their "Dream Scenes" cost between 1600 $L and 2000 $L and are copyable and modifiable. They are sized anywhere from 40x40 to 55x55 (from what I could see), so you need a moderately-nice chunk of land to place them. 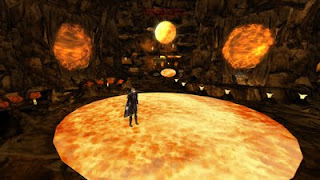 The Dream Scenes have a "bubble rezzer." You rez the bubble, sit in it and it sends you 1000 (this value can be changed) meters into the sky and then rezzes the scene and skybox around where the bubble once was. Many of the scenes feature a bar you can click on for drinks, many, many places to sit and sitting animations, a way to have one bubble store multiple scenes (I don't know if it can rez more than one at a time, as I only bought one). I thought the work that went behind these was worth it, so I dumped a bit of $L into their Lava Lounge, preparing to modify it into a dragon cave for my Seawolf Ancient dragon.

Buying it gives you two options. You can rez the bubble each time and have it rez the scene each time you use it, or you can simply rez a more permanent skybox and send the whole thing into the sky. I rezzed my permanent skybox for a look, and sure enough, it was very spacious and the work to get it "done right" shows. The roof turned out to be too small to suit my dragon well, and since the roof was made of many pieces together that weren't linked I didn't want to spend all that time getting it just right and make it work. I'm lazy.

Then I zoomed out and decided to play around. I unlinked all the pieces, then deleted the outside box. Turns out only half the space in the box is being used! One of the photos in this story shows where the "top" prim of the box is in relation to the "room" of the Dream Scene. Reminds me of a bag of potato chips - half the bag is just air. Still, the roof was high up and not many would NEED all that "air" space in the box. Even if they did, the Dream Scenes are copy and mod, and are easily built to anyone's specifications.

I'm going to give this a solid 4 Dragon Hoards out of 5. The effort shows, I think the price is right, and there is enough of a selection that if you don't fine the one you want, an existing one can likely be modded with a few hours work into the one you want to keep.

The Garden of Dreams can be found at the Garden Of Dreams sim.