Scuba diving is something many of us think about doing, but not many of us actually do. There's finding the time to get the gear, the training, and driving to locations. The training itself is done for a reason: being deep underwater puts you in deep doo-doo if something goes wrong with your air supply. And there's the expense of getting all that equipment. 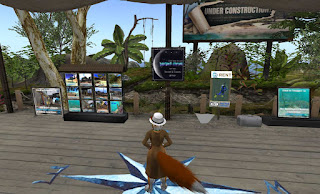 Fortunately, there's a place in Second Life where you can go through a virtual scuba-diving experience: the Blake Sea Scuba Center. 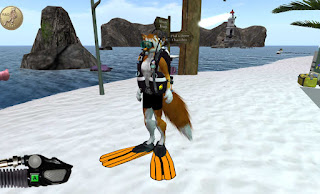 Heading over to the Ukupanipo sim, there was a board with various locations on the sim one can teleport to, such as the Harbor and Diver's Shack. There was also a kiosk for scuba gear with the word "Rent" on it. To get it, right-click and pay the rental fee. You then get a folder with the parts of the diving outfit. The instructions say to stay next to the terminal, and add the parts starting with the SubOceana Timer, then you can just right click on the folder and "add to outfit" (or just put on one piece at a time). Some avatars such as furries, the mask may require a little adjusting. And there's no smaller set of scuba gear for tinies, at least not yet. Once the suit is all on, you're now ready to dive, which you do by walking into the water. The instructions did say you're limited to the sim in which you pay for the rental time, and if you end up removing the gear, you'll loose your time. 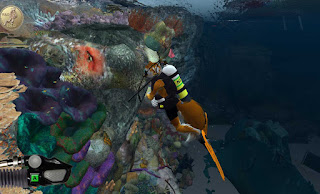 The HUD to your lower left marked "A" will help you rise and fall. To rise, press the round button. To dive some, press the rectangular button. On the upper left is the counter for how much time you have. You start with two hours, which should be enough to explore the place.

Going underneath was quite a sight that very seldom have I seen anything like in Second Life. The underwater scene in itself is worth a trip even without the scuba gear. With it, it's an experience unique in the virtual world.  There was a reef with colorful coral and water plants. And then there were the shipwrecks. Of the ships, the SS Thistlegorm was the most interesting as it was sunk in World War 2 and was discovered by noted oceanographer and co-inventor of the scuba tank Jacques Cousteau. 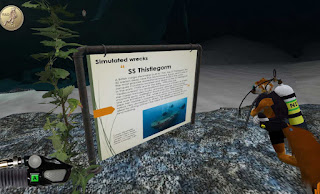 I should note that in 2008, there was another scuba sim in Second Life, PADI, named after the real-life divers group. The group says they're also approved by PADI. I found that not only does this area match the quality of my experience by then, but exceeds it. 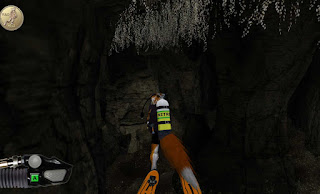