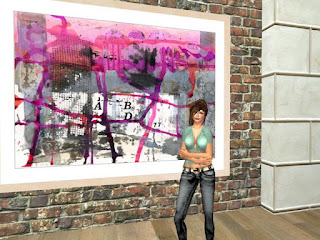 Xirana Oximoxi (Nuria Vives)is a mixed media artist though trained in classical realism, she explores all mediums; constantly learning new ways to express herself in different ways. She is one of many real life artists who brings her art into second life. Her work is exhibited in various venues in major galleries throughout Second Life. Exhibited are series of Xirana’s portraits, children’s books, and mixed media works that were produced.

Xirana works from photos as well as on location...it depends on the subject matter. With landscapes she would start sketching outside, then take a photo and finish the work in the studio. With abstracts, she allows the painting inspire her.

Xirana is inspired by the old masters, Munch, Pollock, Soutine, Picasso and especially Goya as well as Monet and Turner. Her greatest influence would be her grandfather who also was a painter and a photographer but had died when she was very young. Also, Xirana gets help from going to exhibits and reading art books.In Second Life her favorite artists are actually 3D artists such as Meilo Minotaur, Mistero Hifeng, and Rose Borchovski. 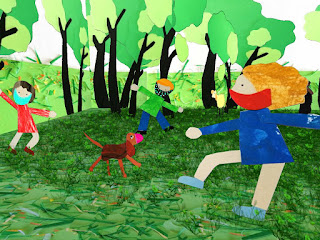 Xirana started to exhibit in Second Life just for fun by renting a small gallery. Then as she found herself exhibiting in more galleries it became a way to create more art. Some galleries have a policy to change exhibits every three months more or less.So,in Xirana’s own words, “... so, it was kind of a way to think, what can I exhibit next! (smile).... and it is a way to share what you do ... sometimes more people will visit your exhibit here than in real life.” She had found the pressure to change exhibits affected her real life art, too.Some of the galleries that are exhibiting Xirana’s art are The Galleries, La Maison D’Aneli, InterstellART and Artists United Gallery.More collections of her works can be found at Time Lost Art.

One of Xirana’s projects in Second Life as well as in real life are her children's books; she writes and illustrates them. A friend suggested that some of her drawings would be perfect for children's books. She researched in public domain for stories but ended up writing her own. A course in illustrated children’s book was a great help in getting started in writing and illustrating children’s books. 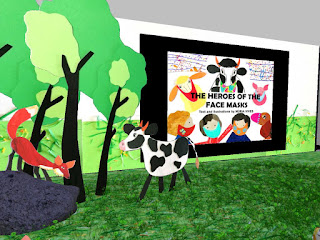 Aimed toward ages 5 to 7 years old, Xirana’s first story was about a little mouse and his adventures. One of the adventures was Minu exploring a river but accidentally falls in. To rescue himself he grabs a chair as it flowed down the river. Minu encounters an old man who takes Minu in to live with him.

Xirana has since then written 10 other stories including a family of hippos and a girl named Amanda. Xirana describes Amanda as a curious character, open to learn and willing to help friends. She had written and illustrated five other stories relating to her adventures.

In Second Life Xirana’s children’s books are in exhibit at The Galleries and her gallery in Jubata. At The Galleries, Georgiana (180, 109, 48), a 3D setup of her book “The Heroes in Face Masks” can be viewed. Delightful paper sculptures and collages of animals and little children dancing on papered ground. At her gallery at Jubata (131, 245, 99), there is a slideshow of “Amanda and the Ladybug.” 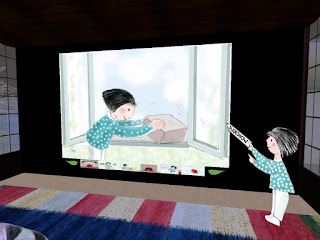 Xirana’s children books are available on Amazon (link) and her own website, http://mynicebooks.com (in which a donation can be made for a free downloadable book). Lots of her books are in some educational platforms in schools.

Xirana’s advice to new artists who wants to exhibit in Second Life is “My advice is that here all is possible...No worries about galleries, to create your own is very easy...”

To see more of Xirana Oximoxi’s art visit her website at http://nuriavives.com/. Xirana sells her works in her Etsy shop at https://www.etsy.com/shop/NuriaVivesArt. In real life Xirana’s artworks can be found in Spain and France. Also noted is her fundraiser, “A Pencil for Ghana” at her blog (link).