Longtime readers know about Arcadia Asylum. These freebie stores, or libraries as they're officially called, have extensive collections of goods that can be picked up for free. A few days ago, a new one opened. This one was quite litterally down the street of the Newser office, in the HV Community sim. Like the others, Prof. Grey (BrianL61 Landar) is the builder and owner. 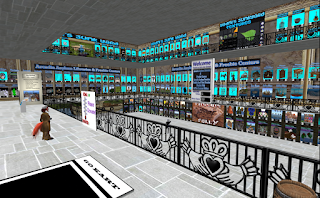 "Opened the doors yesterday (February 29)," Prof. Grey told me, "Full line library, including YadNi's Junkyard and Freebie Folly." The Sunweaver library's items are on three separate floors. The middle or ground floor has the works of Aley aka Arcadia. The lower or basement floor has the Freebie Folly items. The top floor, also accessible by the railroad line, is where the items that were part of YadNi's Junkyard are. The Junkyard had been one of Second Life's most popular freebie centers until it's closure in July 2015. Freebie Folly was a freebie store in Skidz, but it, "suddenly went vacant. The land still bears the Freebie Folly name, but it's a empty shop now." After attempts to contact the owner, Arcadia started displaying her free items. 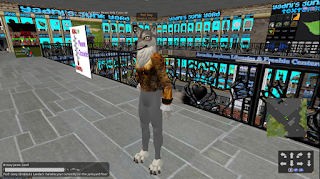 Talking to Prof. Grey, that the Newser was nearby was an interesting detail for the place's location, but that wasn't all. "The land and road /water access was to die for." The railroad system got his attention as well, "I'm loving it. Can't run my SLRR stuff, but hey, a train's a train." Shortly after the store opening, the Sunweaver passenger train service was adjusted to stop at the Arcadia location.

The number of items packed in the place is truly massive. "This locations tops out at 9487 free items," Prof. Grey told me, "The only other location to match this is Anilis." Most of the items are not shown individually, but are in vendors that can be browsed with left/right arrows on the bottom. One can find avatars, vehicles, homes, furniture, plants, ships, boats, clothing, and much, much more. While some of the items are simple compared to what's available today, others are of decent quality. But in either case, one can't argue with the price. 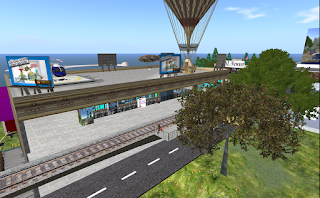 By all means, give the Sunweaver Arcadia Asylum Library a look. Even if you have plenty of stuff, you just might find something interesting, or something you may want to tell a friend about. And if you haven't been to the Sunweaver area before, feel free to look around. This of course includes the Newser office, which is a little to the west down the road.