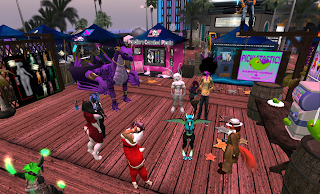 There's a big event going on in Montecito Bay this month: the NuYu Modtacular. The main feature is the number of booths in the northern part of the boardwalk. Dropping by there recently, I had a few words with one of the women behind it, Becky Nosferatu. Not far away was Magpie Hyena (VesperBloodwing Parx), whom was also it the event.

"The NuYu Modtactular event is a mod-exclusive gacha event!" Becky told me when asked to describe it,"It's main goal is to help people find one-of-a kind, unique and new mods! Hence the awesome auctions and all the exclusives we have." When asked how long it took to organize, she answered it was about three months, "It was pretty back-to-back for most of the staff coming up with ideas, took us a good half a month to come up with the name. The auctions were purely Mag's idea and we ran with it!" 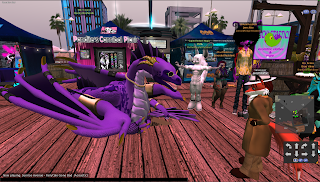 There were almost two dozen booths on the boardwalk, eighteen tents and several smaller stalls, each representing a vendor. "The center tents, near us here, are the premium vendors," Becky explained, "The booths here in the center, these four? They're the sponsors. They were randomly picked. The different sizes were how many prims were distributed to each, with the sponsors getting Entertainment events."

Magpie chuckled, "Well the folks that couldn't show up, we decorated with various furniture. But one of them we went crazy with. That's our crazy corner I guess. Everyone needs a crazy corner. Don't, look too deep into it. Me and Brae don't even know if Becky's seen it yet." Becky gave a snicker, "Yeah, a few had to back out last minute. Some are still empty and were planning to make it. They ended up having family emergencies and such. Hopefully we'll see them soon." 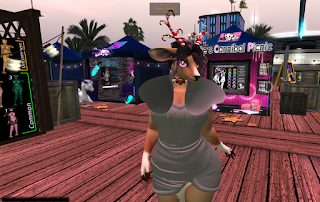 Becky did say a few backed out, "But it happens," Magpie commented, "We ended up with nearly everyone here, which is honestly incredible." "It wasn't a lot we lost," Becky added, "I was really impressed with how many we ended up keeping." "We did have some late folks," Magpie stated, "but they both were super communicative. One of em's already up." "Honestly if it wasn't for Brae (Brae Vaher /Braelynn Darkstone) and Mag's help," Becky commented, "it probably wouldn't have gotten done at all, Bixyl. The three of us busted our (behinds) getting this event on time, and it's really proving to be a great idea." "We all had our parts," Magpie remarked, "plus helped each other with certain things. It was definitely a group effort, and the Montecito Bay staff as a whole should also be recognized for their patience and support." 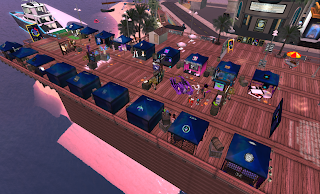 I asked if anything in particular stood out. Becky answered, "Well the auctions, of course! Really, every vendor has unique stuff. Most are for the Regalia body currently, that's super popular right now." Magpie commented, "I was shocked how many worked with Regalia (chuckle). But it's definitely an up and coming avie. Plenty did omega compatible mods and Kemono, and some feral stuff too here and there." When asked more about Regalia, Becky responded, "The body is from Sugarcult. It has bodies that fit existing bodies clothes and is aimed at furries with digitigrade legs and a long neck for alternate heads. It's main draw is it uses a very simple UV, so a lot of modders have been working with it easier than (other) SL UVs. The Regalia is a lot cheaper than mainstream bodies, too, which is a big draw for the cheaper furry crowd, as human skins and heads tend to be a lot more." Magpie commented, "I think modders are attracted to the Regalia because the UV unwrap is way easier than the typical Omega unwrap, but it's got multiple bodies that seem to fit just fine with nearly every article of clothing made for some of the popular current omega bodies." "She's been updating it like mad, Bixyl, so there's a lot of stuff." "Yeah I think it's gonna catch on. She literally is keeping track of all the bugs." 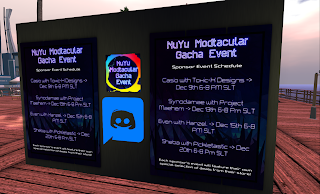 My next question was about the auctions. Becky answered, "They're still taking bids, and will be all month. Mags can tell you more." Magpie responded, "Getting the script made by our scripter was terrifying but he worked damn well. I don't know JACK about scripts, so Becky and Trevor helped me a lot through the process of getting the script to do what we needed it to do. I love that it ended up working to where customers could bid on a mod they wanted, it'd instantly take their Linden, and if they got outbid, it'd be refunded back. Anyone had the choice of making an auction mod, but in the end we ended up with the five current ones you see at the front. It's only day three, and every single mod has had at least one bid. They all worked SUPER hard on their auction mods and I'm extremely proud how successful it's been. The auction was something I wanted us to do because it was basically like selling off a character. A new look that would never be sold again, not even as a recolor. It's like getting a custom from a modder, but it's already done. Some of them even gave their Auction mods a cute name and personality in their ad images and information." 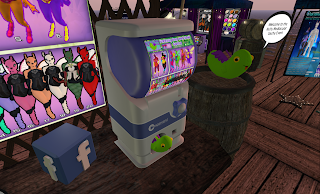 I saw a schedule with several music events and asked about it. Magpie told me, "Those are the Sponsor events! All sponsors get their own show with the Entertainment department! (grin)" Becky added, "Yeah! so part of being a sponsor for the event, they get an event dedicated to them and their store by our entertainment staff. Think Mod Monday, but for them only." Among then was an event DJed by Sheba Metaluna of the Bay's Flying Pickle Lounge. Becky told me, "She actually sponsored us using AllFur Radio! They've been advertising it a lot for us, and in return, they are played here." Magpie added, "She did. AFR's on the sim too for the duration of NuYu I believe as our music channel when shows aren't happening? Sheba's been helping out a ton too with some cute as heck ads during her shows." 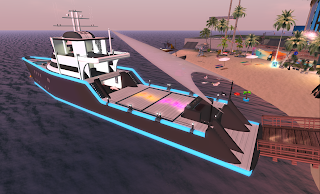 This being December, Becky reminded, "We have a lot of Christmas themed mods to this event too." Magpie stated, "... all the gacha machines at NuYu are at or below 100 Lindens." Becky then directed out attention to a nearby boat, "I should add, the events are also going to be in one new location. On the yacht! We're treating all our sponsors to an awesome boat party. (smile) Whiiich that reminds me, we'll have to move some of the hardware around to the boat. Heh."

Before we parted ways, Becky stated, "This is going on all month and we hope people will enjoy it enough that they come back next year! Or maybe for even a summer time event. We haven't decided that yet."

The event goes on to Tuesday December 31st.