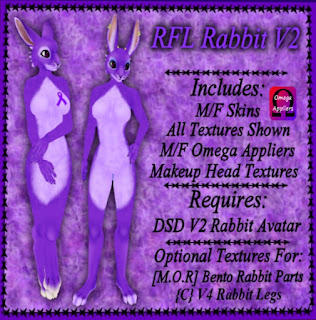 To help raise money for the Relay for Life, some people are making items for sale in which the money goes to charity. Among them, an avatar mod made by Astra Noctura (Silverskyranch) called the "RFL Rabbit V2." It was made for bunnies from the Dark Spot Designs avatar maker, often called DSD for short, but can fit another called PAWs, giving them a purple coat of fur.

I heard Astra was at the Farshore Field Air show. When I arrived to meet Astra when she was with some of the Relay Sunbeamer team, they were already talking about the bunny avatar for the RFL. I asked how was a "mod" different from regular avatars. I was told mods are not complete avs in themselves, but are modifications of a complete one, which must be bought separately. 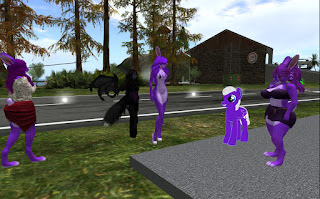 "Mods kits require you to own the base avatar,"  Destiny (Dusk Griswold) told me. Kylee Gracemount nodded,  "Mine was like that." "Then you buy the mod kit made for that avatar," spoke Destiny. "In this case the Mod is custom textures Deaf," spoke Kylee,  "Others can have different parts you have to add. or replace from the original." "This was a fancier mod, in that it included a head and tail," Destiny told me.

"Where can I get the mod?" I asked, "I can use that on my existing bunny avatar." "Which brand of bunny avatar do you have?" asked Astra. I answered "AX. I have the AX brand." Bixyl Shuftan would later tell me it was short for "AnthroXtacy," an older brand from earlier days in Second Life. "Oh, the mod is only for the PAWs rabbit head, or the DSD," informed Astra, "AX is pretty old." "AX is an old one," spoke Destiny, "This av is based on a specific head that is sold." I then asked how much the DSD bunny was. "V2 is 1500," answered Snowy Sugar Blossom (Skylark Lefavre). I was surprised, thinking that was a bit steep. "Do they still sell the v1?" asked Destiny, "Likely cheaper. And still good." "Yes, the V1 is still on the Marketplace,"answered Astra. Kylee gave me the landmark to Astra's store where the mod was. We would find the DSD V1 bunny on Marketplace. 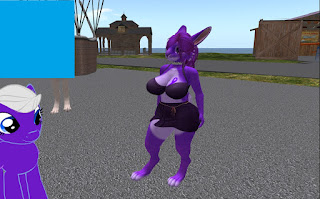 The question about clothes came up, I realizing I didn't have clothes for a mesh avatar. When asked if regular clothes would fit, "If you use the SL body, then yes," answered Astra, "The mod is made for Maitryea, but can be used on SL body or any omega-compatible one." "Some of my stuff is still SL Body.  I switch back and forth," spoke Kylee Gracemount, who was wearing the Maitreya Variant. I thought I should be able to find some outfits for bunnies at Furry Fashion, and spoke so, "I need to rez the DSD Rabbit White, and the dual pack, too." "This rabbit wasn't specifically for RFL," Astra told me, "but the color design of it was."

I was told a little of how modifying the bunny tail went. "Copied from the instructions," Kylee Gracemount was saying, "Tail - This part is a bit tricky.  There are 3 parts that need to be retextured seperately using Select Face.  The first two are pretty easy, and use the tail texture with the included Alpha. (simply called 'Tail').  Apply this to the first two faces you grab.  For the third layer, you will need to cam inside of the tail to see it.  This layer, when you click Select Face on it, you will notice has Alpha set to 'None'.  This is the one that you apply the Solid Tail texture to.  Like with the Ears, you might need to re-set the Scripts after you wear it."

There was a little trouble when someone changed out of a small Manticore avatar, but it was soon resolved. I invited Astra to be on my friends list so we could contact each other later about the article. I then gave personal reasons for wanting to do this, "I understand about losing a family member to cancer.  I lost my Uncle and Mom to cancer." "Mom had breast cancer that spread to her bones," Astra would tell me. I asked if it was okay to write about this, and was told I could.

I talked with some people about the Relay Rabbit. I asked them one question, to please tell me in their own words about the Relay Bunny. Bixyl Shuftan, the Newser editor, answered, "Well, I haven't gotten it yet, but I have a few friends who have, and they're impressed with it. It's Bento-enabled, so it's able to take advantage of those features. For those looking for a good purple bunny,  a way to support the Relay, or both, it's a good choice." 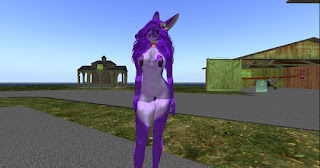 "Astra made it as a way to raise money for her team Meli's Maniacs. But to me it means much more." Snowy told me, "I want people to know I relay for a cure for cancer because I have lost so many friends and family to cancer.  My color is pink, but I proudly wear this.  My colonoscopy put a scare into me. Was a super close call. I am wearing it also to tell people I am not going down without a fight."

When asked about the Relay Rabbit, Snowy spoke, "The creator sells them at The Happy Vixen vendor section. They are for the DSD Rabbit v2 but she has some for the DSD Rabbit v1 as well. She has a store on SL Marketplace.   https://marketplace.secondlife.com/stores/109832?  I might very well be wearing this Relay Weekend as well.  I want to know the best cure for cancer is prevention.   Get tested and often. I like to see others wear the bunny in honor of those they relay for as well.  It is a symbol of hope. (smile)" 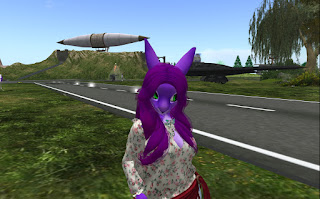 "It is an applier for the DSD Rabbit, either V1 or v2," Kylee told me, " Easy to apply if you have use DSD or Omega compatible parts.: I have a quite a few of Astra's mods. The V2 Mod I have has multiple textures you can use.  It has appliers for the Omega and the DSD parts included. I enjoy supporting Astra and The Relay itself."

"Since loosing my mother to cancer six years ago, the RFL has been something that I have been far more passionate about," Astra would tell me, " Since I began making furry avatar mods in Second Life, I have always tried to make at least 1-2 per year that was a special Purple and/or Pink Ribbon avatar mod, with all proceeds of it's sale going to RFL.  Over the past year, my modding skills have greatly improved, and I have really gotten into making various bunny mods. So this year, I felt that the perfect release would be a Purple Ribbon bunny, especially since I knew so many bunny furries in SL.  I made three different variations of it for different avatars, and so far it has been the best selling yet of my RFL mods.  I may not be able to do much in real-life to help in the fight against cancer, but this Purple Ribbon Bunny is my own way of doing what I can, however little, to help in that fight."