"The Well: Ultimum" By Loki Eliot

Loki Eliot, the self proclaimed "digital mischief maker," is noted for two things. One is being the leader of the "Goonies,"  a group of adventuresome Second Life child avatars. The other is for being a skilled and creative builder, such as builds for the Second Life Birthday "The Behemoth" and "Dungeons and Nightmares."  A few days before Halloween, he came up with an adventure named "The Well: Ultimum." 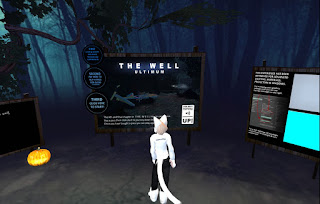 "Ultimum" is the fourth installment of "The Well." The first he opened in November 2012 after Loki and his fellow Goonies visited a haunted hospital, and he decided to try and make something scarier. He came up with an adventure in which the player investigates the disappearance of a team that went down an old well to find a boy that fell down it. The second adventure took place a year later, with more areas to explore. The third, which ran from Halloween to early December 2015 started with the player waking up in a mental hospital and having to make his way out. Loki promises the latest "The Well" will be his last, describing it as a prequel that takes place before the other adventures. 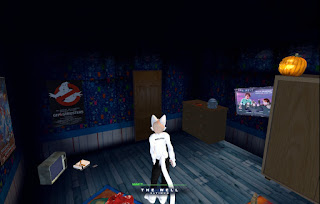 To play "The Well," head to Escapades (218/232/3002). One board shows the recommended settings to view the game. Another has three buttons to click on. The first is to allow the games experiences to automatically affect your avatar. The second allows you to purchase a pass to the game (200 Lindens). The third allows you to start, you automatically having the game's HUD attach to you, showing your avatar's level of sanity (your own may be another matter). 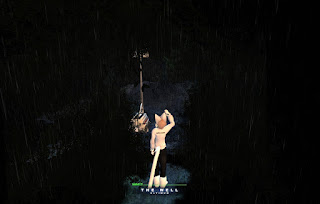 The story starts in a boy's bedroom. Looking around, you find a boy's diary with all the pages torn out except one, in which he describes himself as being scared of "the THING." Leaving the room, you find yourself outside the house at night, with a station wagon still running and shining it's headlights onto a path into the woods. Looking around, you find a flashlight, and more pages of the boy's diary. Occasionally you will see a TV with a video, which require media to be enabled to view, but are not necessary to progress into the adventure. The pages help explain what's been going on, and one needs to get all of them to descend down the well, located at the end of the forest path. 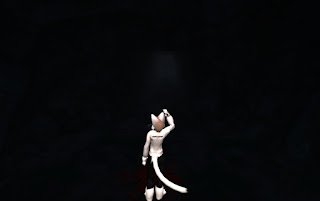 Down the well, the player has to navigate a dark maze of tunnels. Unfortunately for you, the passages have ghosts floating around that in the darkness are barely visible. If one touches you, you hear a loud scream (real fun when you're wearing a headset), and your hud loses some of it's sanity level. Once you run out of sanity, you start back at where you first appeared under the well. Depending on your tolerance for shrieking, you may find yourself more terrified than frustrated as you try to get pasts the ghosts and tunnels.

There is a video available of the game, made by Strawberry Singh as she braved the spooky woods and terrifying caverns under the well along with Draxtor Despress and a few friends. There are more than a few spoilers if you watch it, so consider yourself warned. She found the ghosts more than a little frustrating, "Loki's trying to give me a heart attack! ... I don't have much sanity left, in both worlds."

All in all, a worthwhile adventure that fans of horror should enjoy that takes good advantage of Second Life's capabilities. Whatever Loki will offer next year, he's set the bar high for himself.