Well folks, here we are again, now on our third art exhibit in a row. A notice was sent to the Newser staff, that a reporter was needed to cover an exhibit of M.C. Escher's work. I responded, immediately, that this was my baby. As a Graphic Artist and Engineer, I have been a fan of Maurits Cornelis Escher (1898-1972) all my life. I was 22 when he passed on, making him a contemporary artist and inspiration in my own works. It is very likely that I have been a fan of MCE since before the creators of this exhibit, Solkide Auer and Sniper Siemens were even born. This exhibit is found on the LEA 15 sim. I didn't need to even search for a LM, because it was right next door to the last exhibit I wrote about. Arriving at the landing point, I found myself in the lower level of a flying saucer shaped structure. There are a number of objects to explore at that level, before going up the stairs to the main exhibit.

My first visit to a sim is always a short one, to get an idea of the layout, make a LM and get a first impression. I return a few more times, to get more insight and take pictures. On this first visit, I notice that on the first level objects have been placed to provide key information that will help make the exhibit better understood and enjoyed by visitors. The first thing they want you to know is that it took two artists to build the exhibit. Next, we see two signboards that show the proper settings for Firestorm and SL viewers, to get the intended lighting effects for the exhibit. Next we see an original MCE drawing, placed as it was originally drawn. In addition, there were a number of the objects, used in the exhibit. I also took a quick look around the upper level, before dashing off to another appointment. Later, before returning, I reported to the Editor that I would indeed write the article, but it would be a short one and I would have to add a bit of "spin" to make it sell. 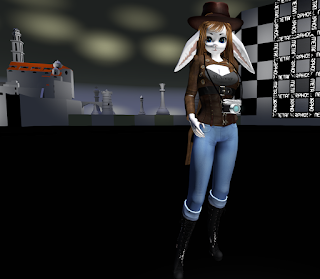 When I returned, the first thing I did was adjust my graphics settings, hoping to get the spectacular lighting effects that I thought Solkide and Sniper had intended. Alas, the lighting didn't impress me. I thought perhaps there was a problem with the viewer I was using, so I switched from Firestorm to the SL viewer. After matching my settings to those on the signboard, the lighting was the same as in the previous viewer. While in the SL viewer, a notice popped up, saying it would upgrade the viewer on my next start, so I closed it and came back. This time, the upgrade had set the lighting back to default settings. I could now see the difference, with and without the correct settings. When I corrected the settings, I was back to the same lighting as I saw in the other viewers. It was not spectacular. If anything, it was very subtle. It would take a bit longer to understand why the artists placed so much importance on getting the settings right. 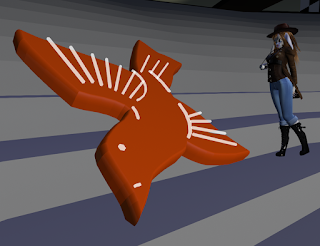 At the exhibit level, the lighting is what, in stage lighting, we call a "wash". Little ovals of soft white blurred lighting dotted the walls and ceiling, beyond the perimeter of the physical exhibit. A single spot of light illuminated the center of the floor. Aha! Perhaps they want the exhibit to be seen from the center. Using Alt+Ctrl+T, to see the invisible source of the center light, I moved to where the light was directly above my head and entered "Mouselook". Doing a complete 360 degree turn did not improve the picture, but it did produce a thought, in my mind. This exhibit is built in a circle, around me. As an artist, this thought was interpreted as art "in the round", a.k.a., 3D. Suddenly, the lighting made perfect sense. By being outside the exhibit, it enhanced the 3D perspective. At this point, the artists gained  in status. Their art had communicated the message that they wanted me to hear. They had converted MCE's 2D drawing into a 3D object and I, the viewer was now inside the creation. In my attempts to create Escher style art, these were the two things that were the greatest challenge, making it 3D and being inside the art.

Now that I understood the main message, that of turning Escher's "Metamorphosis" into 3D art, my questions switched from what they were doing to how well they were doing it. I began to investigate the individual elements that went into building the exhibit.  It looks like it was made from hundreds of mesh objects, which were then assembled. None of the mesh objects had any name, other than "object". How hundreds of objects, no two alike, were made and assembled is something I have experienced with my PXL structures, so I know how difficult it can be. This pair of artists, compared to my skills, are master art engineers. If he were alive today, Escher would probably like their work and tell them, "Bedankt voor het compliment". 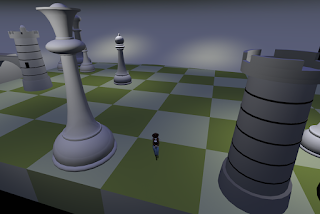 While I was in the middle of being in the middle of Metamorphosis, I got a group message from my friends at Sunweaver. After telling them I was at the Escher exhibit, Mamma Gil responded with, "I went to one, once, but damn it wore me out. I never did find the top of the stairs and just felt like I was going around and around in circles". While I was there, there was very little visitor traffic. If you go now, there's a good chance you'll be in the center of attention and the circle will go round and round YOU. In closing, it turns out this article was not short and did not require any additional hype. They did a great job. I  recommend that you go see this exhibit, even if Escher is new to you.
Have fun,
LEA15 (128/129/1998)
"Sha"