It's been a long time since I went avatar hunting (or really, anything hunting since there's really nothing in SL I need at this point), but I'd heard of two locations with mesh avatars that sounded popular, and so I decided I'd check them out. The first location is The 5th Wolf, a place with a couple of mesh avatars and some clothes for the (non-mesh) 1st Act werewolf avatar. 5th Wolf has two avatars, a wolf and a minotaur, so I bought them both (at $2000L a pop) and decided to have myself a look.

First, the Wolf. It comes with two types, "Beast" and "Normal", which don't seem to be different at all except one might be a little bit larger than the other and might be better working or something depending on the AO used. Said wolf does NOT come with its own animation override. It also puts you into a very wide stance when you first wear it, which made me go "???" and tilt my head for a minute or two. While it has no AO of its own, the notecard suggests the "Vista Animations Beast Ao-vo1" (L$ 399 according to the notecard). It is RARE that you don't see anyone include animations in their work these days, but according to Karolline Khandr, the creator, "I don't know anyone who does animations." We can only be good at what we know (smile). The other big negative to this wolf is that there is no talkjaw... the mouth doesn't move. They're working on it, from what I've been told.

On the good side, the mesh looks awesome. Probably one of the best meshes I've seen yet, very detailed without looking like someone just painted a picture onto and over a blob of a mesh and called it good. Still, the programming "feels clunky" when I move without an AO, and the HUD was a bit slow to respond in some places. To be honest, at 2000 $L, with no AO and a lack of a talkjaw, it does feel unfinished (or underfinished). So I can't give it the best rating. I want to give it 4 Dragon Hoards out of five... but I just can't. This one gets 3 Dragon Hoards out of five, and that's pushing it. 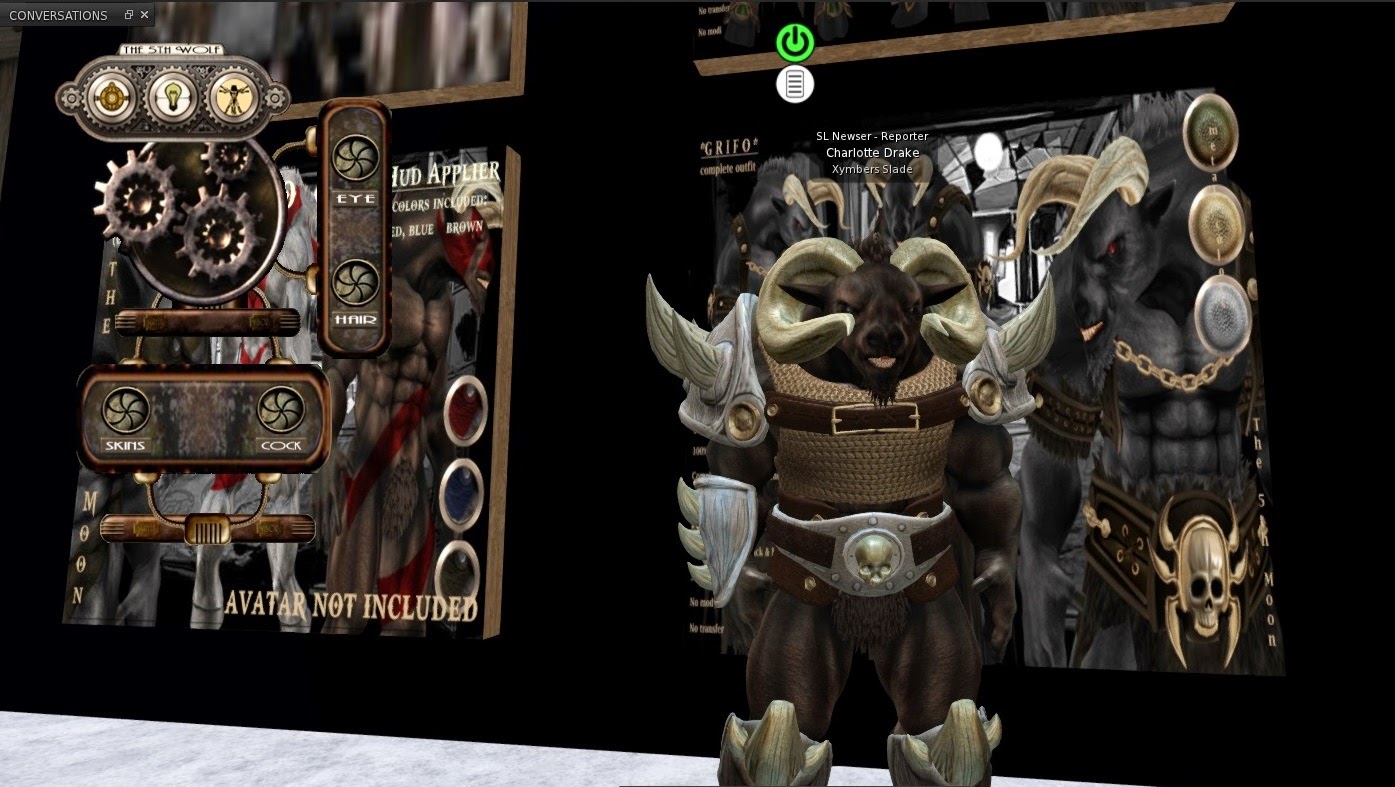 The other avatar is the "Ukko Minotaur." It comes with two different forms, one with hair and attachments, and one without. It also comes in two sizes (big and slightly less big). It took me a little bit to figure out, especially since the box I purchased was of an old version and it had yet to update. There's still no AO or talkjaw on this one, but it does have an option to remove the horns (especially since some of its costumes, sold separately, come with another set of horns). There's options for skin coloring (four different variables), horn coloring (three) and eye color (four) and here the effort shows; it's as if the creator learned from whatever mistakes or whatever they ran into when creating the wolf. I'm going to give the Ukko Minotaur a good 4 Dragon Hoards out of Five.

Finally we have the last of the avatars I'm reviewing today, the mesh KOT Centaur. I pulled out my dark elf shaman avatar, strapped her into the equine body, and... 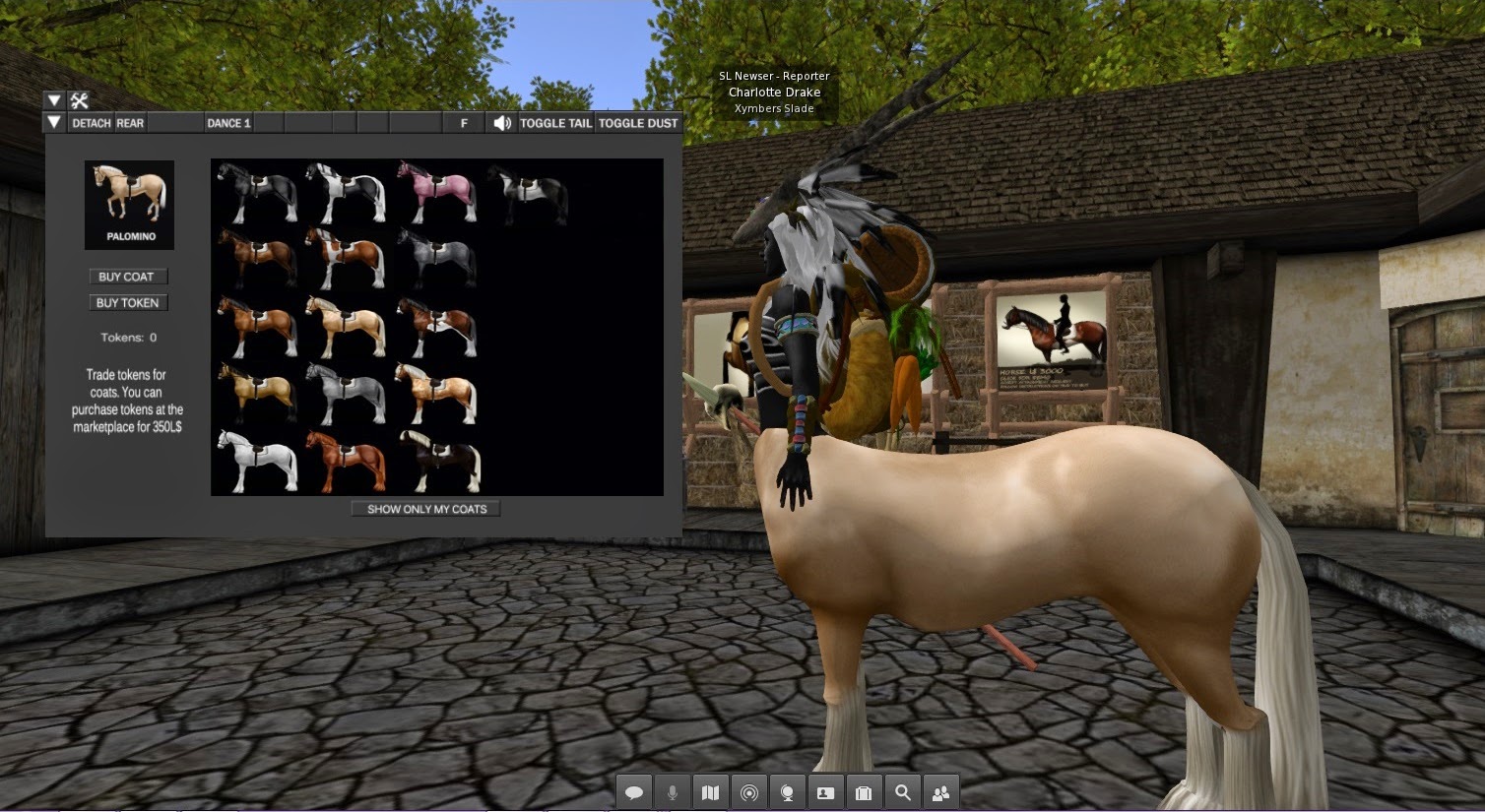 First, there's a demo you can get. The demo disappears if taken outside the sim, and only shows the mesh color on one side of it while you're exploring the coats. After getting the real thing, I found the avatar itself has 16 coat options, from black to seal to palomino to Pinkie Pie Pink. The skins are bought with "tokens" you can buy on the marketplace, but I didn't see such option or thing there and could freely cycle through the coats at whim. So I do not know if this is an idea that was abandoned mid-stride, or if the HUD I have somehow has access to all of the skins. You begin with the "Seal" skin (a dark brown) and get one token to start (I bought a "Rocky Mountain Black" skin with it); extra tokens supposedly cost $350 on the marketplace.

The notecard suggests that you should "always detatch the av via the hud" or it causes AO conflicts. I've never heard or seen something like that happen and I didn't have it happen to me when I switched avatars and back, so that is a plus (or maybe I don't use enough AOs... heh). The one glaring problem I DID have is that the arms lock whenever you click on something, freezing in the point animation and requiring a detatchment of the equine body or even a relog to reset. And even then, the arms seem to be "locked" in place. If you type and have the typing animation on, the arms will freeze mid-type when you're done. I had an extra AO from elsewhere I could use to reset the arms' position, but your mileage will vary. Is it a good mesh with good movement animations and clopping sounds while you're moving? Yes. Is it worth $2000L with a glaring "bug" like the arms locking? No. Thus, four dragon Hoards out of Five.