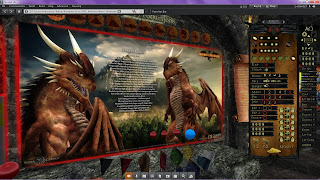 Wandering around Second Life, these days I tend to wander the Social Islands, where new residents start out. In between dodging simcrashers, trolls, religious nuts, "free lindens, click here" signpost-wearing bots, and mic-screamers, I came across someone wearing a huge mesh dragon. It was really well done and when I found out the dragon was by Spider Productions, my interest was raised (as I have some of their original dragons and they do good work). Naturally, I hopped over to the Spider Productions mainstore to have myself a look.

Spider Productions makes quite a lot of things, from medieval armor and weapons, some jewelry, to multiple avatars (the Dragon Lord, an anthro shark, an anthro fox and a "freak" which looks like a rabbit-ized version of a Crux). 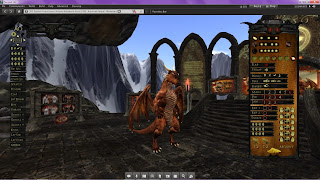 This newest mesh dragon of theirs is billed as "over one and a half years of blood, sweat, patience and experimentation" and quite honestly I think they did a good job. The dragon stands in at about three or four times the height of a normal human avatar (about the size of an adult Seawolf dragon, for comparison). It's very Godzilla-like in its bipedal form, which was a slight turn off for me but I quickly put it out of my head as I messed about with the HUDs. There are quite a lot of different options on an actions hud, 12 different dragon sounds (the roar of which they reuse from their original dragons, but I think that's a shortcut they're allowed to take), and they can both take a rider and carry people in their claws while flying (which is something I haven't tried yet).

The work that went into this avatar is plainly visible, and the only complaints I had while stomping around with it (there's a "stomp footstep" sound that can be toggled on and off) was that the anatomy looked a little weird and that the body shouldn't be supported on such short thin legs. Well tough, this is Second Life, things can look how we want them to look (grin) These dragons are also able to go into a quad mode (there's a shape and a mod attachment to move the feet to the right shape, though to me the movement makes it look like the dragon is crawling on his knees). 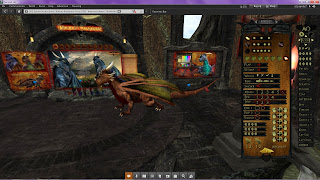 Overall, I think Spider Carnot (the maker of this dragon) outdid himself. Certainly they're much better than his original bipedal ones (of which I have a few). At 3000 $L, I think it's a bargain considering how much work obviously went into making this avatar work. I'm going to give it a full five dragon hoards out of five because to give anything less would be a crime. About the only bad thing that might be a put-off would be the price, but the price is reasonable. I ended up looking at the other dozens of dragons I have in my inventory and went to myself, "People are going to have to go mesh or go home..."

Spider Productions and the avatar itself can be found both on the Marketplace and at the Arachnid Island (129, 243, 376).