Earlier this summer, Bryn Oh had a new art exhibition at her Immersiva sim, "Virginia Alone," which is about a lady, Virginia Blakely, her house, and how she coped with a mental illness she tried to understand. 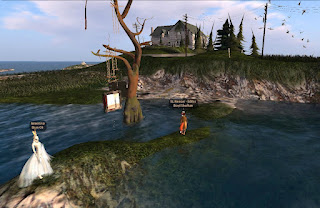 I went to the sim. At the entry point, there were a few signs, including one describing her exhibit. I found a path marked by posts, and began walking down it, soon seeing telephone poles and birds. I then saw a figure nearby, wearing a rabbit mask with a hole cut over one eye and cheek. It was Bryn Oh. She greeted me, "Just building a tree. (smile)" Talking about the house, "The only thing to know is to click the cassette tapes inside the house, and letters. It is the story of a lady I know in real life, who has schizophrenia, and is blind. It is a recreation of her home." She mentioned the sky would change for those using Firestorm, but in my Cool LV, I could see clouds moving.

I asked how she met the lady. Bryn answered, "I met her estranged daughter, and through her discovered Virginia. So I asked to meet her. … She knows she has issues, but she is not aware they are called Schizophrenia. For example, she says in one tape that she discovered her mouth open and saying some words. So she wrote down what she was saying, and tried to figure out why she would say those things and what made her do it. She is quite rational, rational in dealing with the irrational. … She is someone who lived alone, away from society, and fought against an illness that she refused to let overcome her." 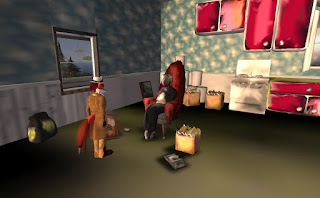 The area has some subtle sounds of being in the countryside. Getting close to a tree with some plastic bags stuck in it, one can here them rustling in the wing. I also came across a couple visitors whom were just leaving after taking a look inside, a reminder Bryn's exhibit is still getting traffic. The building itself had a look of age, made of unpainted, fading, wooden planks. The first room one steps in is the one Virginia had been spending almost all her time in. She was nearly blind from cataracts. There are cupboards, a sink, and a representation of Virginia sitting in a chair listening to the radio. And in a corner are some of the items she collected over time. 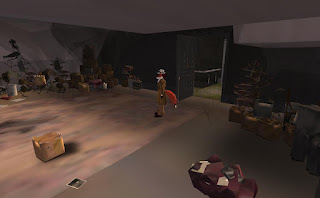 The rest of the house, Virginia seldom ventured to. There is a basement, which with it's flooded floor and network of pipes is artistic creativity on Bryn's part. And there are other rooms, with boxes and bags, and 20 year old cobwebs. Some of the boxes are clickable, as Bryn described, leading to pictures, or links to recordings on Youtube. Stairs lead to a few more rooms. One had a music box, when clicked, was about Bryn Oh's "Rabbicorn."

The house is just one corner of the island on Immersiva. I spotted a couple round structures in the water that I couldn't identify. I also saw what looked like a frolicking fox, frozen in time. At the entrance is a teleport to a store area, an unearthly white region with a number of small exhibits up for sale, and at least one not so small.

I asked Bryn if Virginia knows anything of what she made here. "Oh yes, she is very excited about it. I went to visit her a few weeks ago to update her on the amount of people who have come to see it. And to give her messages from guests who wanted me to relay things to her. She was touched. There have been around 12,000 to see this (exhibit) so far. … The most impressive thing to me, that people from around the world who have completely different cultures or environments in which they live can look at this house and landscape, look at the life of a Canadian woman and associate, even though so little overlaps between them."