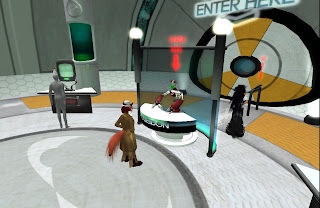 Among the games at Madpea, one of the newest is the Virtual Medical Doctor game, sometimes called VMD for short. For gamers even slightly interested in medical fields and the human body, this game is a must. Even if you’re not, you may find yourself dropping by time to time. The plot: pilot a medical probe called a “Cheiron” which is miniaturized with you in it, and placed inside the patient where you work to cure the illness from within.

Whenever someone has a little pain in Hoshi, they come to the Tupol Hospital. You might not believe it, but there are a lot of patients in the hospital and we simply don't have enough doctors to care for each of them. That is why we need you - help us to get our patients home. We will equip you with the latest medical devices and Poseidon, who speaks 6 different languages, will help you to become a VMD. 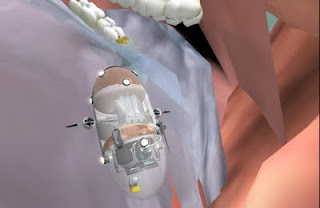 Set at Tupol hospital, there are four levels in the building accessible by the elevator. One level is for new residents of Second Life, a guide on how to go about the Grid. Another shows examples of body organs. Another floor is one players will keep coming to: one with the background of the several missions and their patients. One also gets a HUD to help with playing the game.

To head to the game area, one needs to use the teleporter. Then head down the walkway to the scrub room for decontamination. After that, head to the one of three capsules, the game calls them “Cheirons,” programed for the location of your mission. The first two missions are in the brown-coded capsule straight ahead. 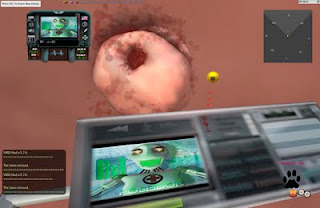 The first mission is simple, taking care of a 68 year old man with an upset stomach, "Chinese Restaurant Syndrome." The real purpose is for you to learn how to control the probe. The Cheiron’s computer will guide the user on how to proceed. It is possible to lose by depleting the battery through too many laser shots. The second mission: to get rid of parasites from a case of bad sushi. From there, the cases get more serious, Mission Three for example involving a heart condition.

For players with slower computers, one may have to wait a few moments for the control panel to rez enough to be able enough to read, for those moments you need to inject a drug (for the first two missions, it’s the one on the bottom-right). And once when playing, I didn’t appear back at the hospital right away. But there’s not much to complain about what I can only call a great Second Life game.

And oh yes, one can pick up a doctor's coat and set of medical scrubs while here.