Once upon a time, a man invented a Toilet HUD. Flush! Gulp! LOL And invented the so-called "EVIL" - "DIABOLICAL" and EXTREMELY OVER-RATED SL security device RedZone. 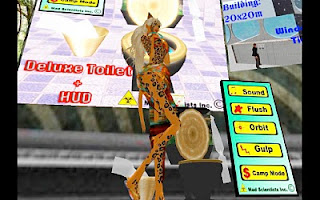 How did this man succeed in pissing off most everyone in Second Life?... his RedZone customers? ROTF LMAO... privacy activists? Linden Labs? and even ordinary SL citizens?

Here's how: RedZone (RZ) is a crappy product... overpriced... and WAY OVER-SOLD.... RZ pretends to be a revolutionary SL land security system, that claims to detect so-called Alternative Avatars (Alts).

It doesn't really. It's a kluge. By deliberately invading people's privacy, RedZone supposedly collects Internet addresses from SL viewers via music and media connections. But due to network address translation, that Internet address could be shared by a million ISP customers! DUH! Not Alts dummy... same ISP!!! Hello AOL! You got mail! lol

Not only that, Toilet HUD genius pulled his marketing right out of Saddam Hussein's playbook... claiming to be dangerous.... wildly fabricating sales figures... pretending to have sold over 20,000 RZs... 6000 in fact on a day when nobody shopped at his store! Except a happy camper on Deluxe Toilet (comes with free HUD) lol... See http://no2redzone.wordpress.com/

And we are led to believe that Toilet HUD guy has collected 5 million Internet addresses! OMG! I didn't know AOL had that many! lol 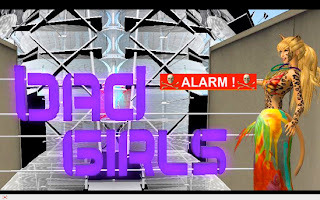 We all owe a debt of gratitude to Scylla Rhiadra for her thoroughly researched exposes on RedZone.

To protect ourselves, disable your SL media and music streams (Ctrl P Audio&Video tab), and wear this HUD called GreenZone. Buy for free. See "How to Play SL Music Outside SL" below.

In Picture 2, you see GreenZone doing it's job: ALARM! Means RZ haunts this dreadful place. I got RZ alarms at Bad Girls, RAWR store, and the RP sim Radiant Gardens. Places we should all avoid like the plague. I can imagine if your SL business is an a**hole magnet, and your customers are SL a**holes, you might feel a need for a hoax like RZ. You deserve each other! Enjoy! lol

I went to two dozen popular places in SL, music clubs, stores, lots of places... Guess what? No RedZone!!! Any place that uses RZ sucks! Hands down! Boycott their businesses! Join the SL group Green Zone Users for more info. 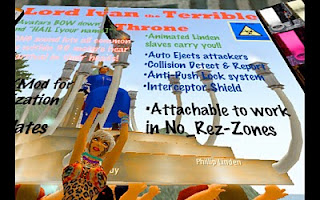 BUT DUDE! RZ is a bummer! What you really need is THRONE! YEAH! Picture 3 shows Lord Ivan the Terrible THRONE! YEAH! It's like Toilet HUD Revenge! You ride on the backs of Philip Linden slaves and go round vaporizing and ejecting mere mortals! Bwuwahahahah!

Throne and other disgusting inventions of an infantile mind... Ring of Burning Death, Very Paranoid Bug Detector, and our favorite "As Seen On TV" product, the Deluxe Toilet HUD (Picture 1). Lure in unsuspecting SL campers with offers of money... then make rude noises and orbit their butts! Dude! We could have fun ALL day long! NOT!

This article is satire. Orbiting and ejecting are extremely violent acts. Fine for video games if you please. But SL is not a game. Bada bing. Read: SecondLife is Not a Game!»

Also, help fight RedZone and other privacy invading products by voting for this JIRA: https://jira.secondlife.com/browse/VWR-24746?

HOW TO PLAY SL MUSIC OUTSIDE SL

LISTEN on iTUNES, REAL-PLAYER, Windows-Media-Player, or WINAMP - SL music programs are based upon Internet streams...

In Viewer 2, (a) Ctrl-Alt-D to open Advanced Menu, (b) If you are in Viewer 2.4 or later... Advanced > Show Debug Options, then in the box type adminmenu, set the radio button to True and OK (c) Advanced > Show Develop Menu and (d) Develop > Show Admin Menu. Then do World > Place Profile > About Land... Select-Copy the music URL off the Sound Tab... and paste it into your favorite media player (outside SL on your PC).

In Viewer 1 (or Phoenix & 3rd Party Viewers), click on the Region Name in the menubar (top of client)... Media tab... sometimes you will see Music URL there... IF NOT, Ctrl-Alt-D to open Advanced/Admin menus, then Advanced Menu > View Admin Options (or Ctrl Alt V), now click on the region name (top menu bar) then go to Audio (or old Media) Tab. Select and copy the "Music URL".

Paste the Music URL into you PC media player. Shortcut Ctrl U for iTunes and Real Player (CMD U on Mac)... then click in the text box and Ctrl V to paste (CMD V on Mac).

P.S. This video is impossibly funny sendup of RedZone... Ummm LOTS OF F WORDS... Caution! If you want a great laugh you have to watch it! http://www.youtube.com/watch?v=GqW0A0PLhQ0