A Personal Change: Updating My Avatar

Probably the most personal of things here in Second Life is one's avatar. Some never change. Some are always changing and never seem to have a favorite appearance. Me? While I occasionally change for a contest or event like a holiday, I keep going back to my main appearance, that of my fox avatar. But until recently, it was the first avatar I ever bought here in the virtual world. 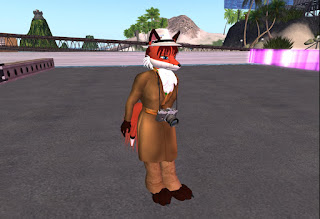 When I first came here to Second Life, I arrived in my starter ringtail. When I started coming on regularly in summer 2007, I thought about for weeks what to change to. Eventually, I decided on the Red Luskwood Fox. The only change was replacing the stiff tail for a flexible one. I would eventually get other avatars, as changing to something else for a little while was fun. But as stated before, I would always switch back to the Lusk Fox.

Time went on and the years went by. Occasionally I would be told the old Lusk was dated and asked me to change. The ears were stiff. The mouth didn't move when I chatted. But I didn't see any other avatar that was particularly appealing enough to change to. I had also heard Luskwood had plans to eventually update their fox avie much the same as their feline ones. Another reason to wait. But due to problems behind the scenes, that was delayed. Eventually I would add a camera and a couple friends made press tags for my hat. But over a decade later, I was still wearing the same avatar from 2007 as my main one. "Maybe someday," I told others whom asked me to change. I just didn't see another fox avatar that I thought was a good replacement to the one I already had.

Eventually, another avatar started looking more and more like a possibility.

Dark Spot Designs caught my attention a few years ago when they discounted the prices for their Fennec avatars to a third of what they were, which came in handy for some "Best in (color)" events, and when I was a certain color for a week after my Relay team reached a milestone. Eventually, I began thinking more and more about their Fox. Finally, I decided to go ahead and get one, the DSD Orange Fox, figuring if it didn't work I could always continue to stick with the Lusk as my main appearance.

It did take a little getting used to, but I came to the conclusion this was the one. 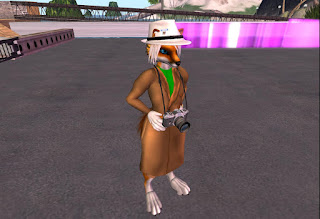 So why this one particular avatar design and no others? I can't put my finger on it other than to say it just seemed more right. None of the other people among my closer group of friends has a red or orange DSD, though one lady among my closer ones does have a silver one. So maybe this reflects a desire to be unique while having something in common with someone I identify closely with.

There are a number of differences between the two avatars. The older one was simpler, in both appearance and complexity.  The Luskwood avatar is 66K in avatar complexity. The newer DSD is 167K. This is an increase of close to 150%. The newer one has sharper details in places. While the Lusk had red head hair and a smile, the DSD has orange hair with whiter ends, and a more neutral expression, with less white in the eyes and larger pupils. So it looks a little like it reflects a little about me getting older and grayer in real life. It might also give some the impression I've gotten a little less happy and more weary over time. I've had a few friends whom over the years have gone from happy most of the time to periods of sadness and tiredness. While I consider myself in good spirits most of the time, not sure what others would say. 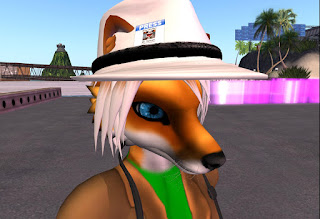 Both avatars are customizable, and I can get both to my preferred height (with the fox avatar) of 5'1". I could go a bit shorter by shortening the legs, but I don't wish too. With the DSD, the ears are flexible, and if I need to wear a helmet can fold them.  The hands are slightly larger. The newer avatar also lacks the chest fluff the Lusk has, so I no longer have to keep undone a couple buttons near the top of my shirt. Among the bigger differences are the legs. The DSD's lower legs and feet are digigrade, walking about on the lower feet, while the Luskwood is plantigrade, walking on heels. This is closer to the foxfolk of the Cyantian comics that helped inspire my choice of avatar in 2007.

And then there's the clothing. It looks like the DSD can handle my outfits. There is one detail. Because it's digigrade, pants get cut off at the knees.  That may cause a complication at some high end parties, though maybe a longer overcoat would help.

The reactions among others have been mostly positive, mostly. One lady I hadn't met in a while that I've known for years exclaimed along the lines of, "I can't believe it! You actually upgraded to a new fox avatar!" More often were calmer compliments saying it looked good. A couple friends commented they missed the old Lusk some. The majority didn't say much of anything. 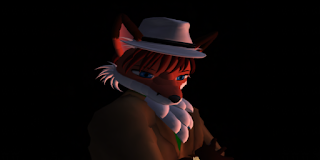 So what does this mean for the older Lusk avie? While it won't be used as much, it's not going to be truly mothballed. As the Luskwood is lower complexity, I may use it sometimes in a crowded sim or one with obviously plenty of lag, or if logging in and the textures have trouble loading. More importantly, Luskwood is still in business. While they haven't updated their avatars lately, they're still around to fix things. DSD as far as I know has gone out of business. The avatar is still up for sale on Marketplace and a few places on the Grid, but is no longer being updated. So if the scripts start to break due to viewer and grid updates, the company isn't around to fix them. If too many break, that means having to give up the avatar. But this is unlikely anytime soon.

So after having the same avatar for thirteen years, finally I made the change.