A Look At The Chibi Noodle Dragon Avatar 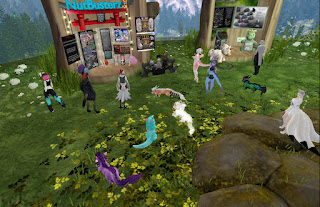 While some people stick with one avatar all the time, many people I know have a small collection of them. While usually in one appearance, they'll change to something else for a contest, a roleplay, or just for a little fun. So once in a while, when friends keep talking about a certain avatar, many are inclined to get one. Some months ago, a number of people were going after a three-headed feral canine called the "Hellhound." This month, there's a new "must have" avatar" the Chibi Noodle Dragon. 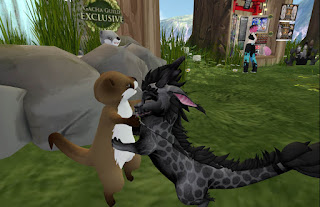 To begin with, the avatar is made by NutBusterz, which in the past has made a variety of products, including some cheeky ones. One friend called the product their effort to make something cute and innocent. The main place to get one is at the Gacha Guild Spring in Dew Drop. There are other good avatars there, such as the "Curious Critters" avatars by XuXu (Xulael Resident). If you want the Chibi Noodle Avatar, it can be found close to Dew Drop (112/116/1738). You'll have to walk to it as teleporting to the Gacha Guild, you'll end up at the entry area. 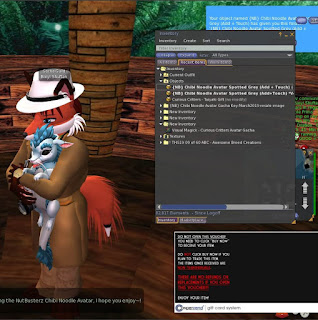 Getting the avatar is usually simple enough, paying just 100 Lindens into the vendor. But it has been known to break, which requires messaging someone to fix it. You then get not the avatar, but a voucher for one. This is non-copyable, but can be given to someone like other items in gachas. To get the avatar, you don't open the voucher, which could break it. You "add" it to your avatar, then click on it. It will appear on you looking like a small and cute dragon in your arms. Clicking on that will get you the avatar.

Like other gacha avatars, some varieties are less common than others. The common ones are the "Natural," "Thawny," "Spotted," and "Noir." Uncommon are the "Piebald" and "Runic." There are two rare ones with pronounced horns. The most rare is the "Koi," which is fishtailed. The vouchers can be traded, and the rare and ultrarare ones can fetch some good money (or you could give one to a noodle fan among your circle of friends and make them really happy). 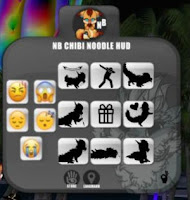 Even if you're not a dragon fan, you'll probably think of the noodle dragon as cute and adorable. While not quite as small as most tiny avatars and much larger than a petite, it's still small. It's natural expression is to smile. It makes cute noises, especially when getting belly rubs, and it's various animations add to it's cuteness.

Moving around is much like a regular avatar, though you're usually on all fours. There is a HUD that allows you to look asleep, mad, sad, etc. There are also nine body animations, such as sitting down, rubbing a whisker, rolled over on the back, hugging, dancing on the ground, dancing on the back legs. One animation has the noodle dragon offering an egg (the Koi offers caviar). If touched, the person touching gets a copy of the egg. It can be hatched into a pet dragon that can be held. I read there is a swimming HUD, but haven't tried it out yet. 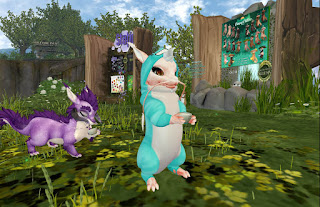 There's a number of accessories available for the chibi noodle dragon. Only a few are made by NutBusterz. Many can be found at the Gacha Guild Spring, such as hoodies and other outfits, teacups with various phrases of which adding it to the avatar gets it to drink it (the ultra-rare in the gacha is a coffee machine). There are also armors available. The avatar is also modifiable, and there are skins out for it. Someone passed me a copyable "death breath" attachment, so some of the mods are being passed around for free. There's also a large number of accessories available on Marketplace.

The avatar is Bento, so some older viewers may not be able to see it properly. The other problem is that to some, gachas can be quite addictive. "Betcha can't stop at just one," one might say. And indeed many can't. So watch your spending. 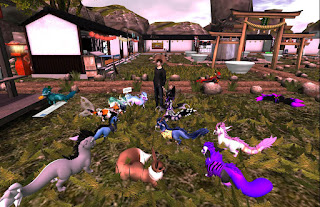 In just a short time, the Chibi Noodle Avatar has become quite popular in some circles. At some events, I've seen close to a dozen of them. To make matters more interesting, a Noodle Dragon themed sim has sprung up. Called "Noodle Kingdom," it's on the sim on the map appropriately named "Cute." The sim has some Asian-themed structures up. But there are also some definitely non-Asian places such as a Subway-themed restaurant. The sim is fairly new, with shops moving in. So there will likely be changes in the days and weeks after this article. 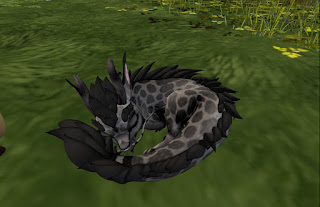 So what's the future for the Chibi Noodle Dragon? As there have been "must-have" avatars before, one can easily dismiss them as another fad that after a short time in the spotlight fades into the background. But that someone was willing to put down enough cash to get a noodle dragon themed sim is evidence that some are willing to bet money that the demand for the avatars and their products will be around for a while. 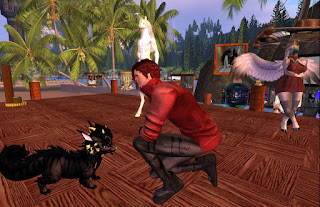 I've heard comparisons to the pony avatars, which eight years after their introduction still have a strong following. Unlike the ponies however, the Noodle Dragons don't have stories to help backup roleplay in the fandom. But as the stories the pony sims base their RP off of are from cartoons aimed at young and teenage girls and young women, it's fair to say the dragons have greater appeal to guys.

While nothing is certain, it's a good bet the Chibi Noodle Dragons will have a following for some time to come.