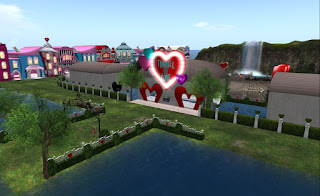 Next week, Valentines Day falls on Wednesday February 14. This is a holiday couples look forward to, with numerous dates arranged and plenty of candy and flowers given out. And in Second Life, virtual couples can go to a number of places to have fun together, or where people can get things to help liven the event or a present for their special friend. 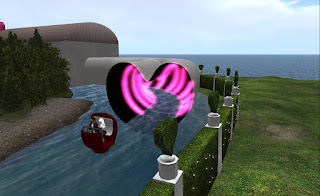 Right at the entrance, you can see the biggest addition: the Tunnel of Love. Circling around the middle part of the town, the couple gets in the small boat near the doors, then goes down a heart-shaped opening into a heart-shaped tunnel with pink lights. As the small boat goes down the canal, it will go through both segments of lighted tunnel and  open air, until coming around to stop where the trip began and the couple can get off, or perhaps take another trip. 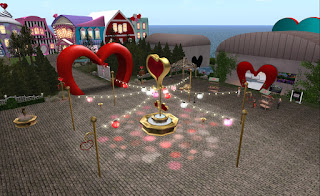 The center of Valentine Town is a large dance
area with a fountain in the middle, and white, pink, and red lanterns hanging overheard. The lanterns are lit, and illuminated the area when viewed at Midnight. There were also flower stalls near the edge, where one could buy a bouquet of roses. The radio was playing romantic tunes, or songs in which the theme was romantic, such as "Crazy Little Thing Called Love" and "Love Me Like You Do." 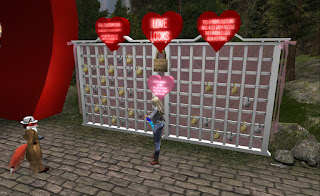 I happened to come across Laura Liberty talking to a couple lady visitors, "Hi Bixyl, how are you doing? Thanks for coming to Townies." The two women with her told me the Tunnel of Love was great, "Laura worked hard. The tunnel is beautiful." "It's fabulous." "She does not stop, always working." Laura excused herself to help someone, and I would meet her at a place to the right of the center area, the "Love Locks" fence.  "I engrave them with names," Laura told me, "Have you seen that in real life? (It) will be a fence full of locks overlooking water. People write their names and throw (the) key in (the) water in that moment in time they were in love. It is sweet. I hear they do them many places now."

This year, Laura had some assistance in building the town, "I had help from Acehole Ixito and Tanyja Resident, took us a month to rebuild it. They are mesh makers, and we worked about a month straight to finish.. We try to make all the towns have some sort of entertainment." She then intoduced me to one, Acehole, or just "Ace" as Laura called him. He looked like a child's handmade paper doll in his avie, "I use this avatar sometimes to be low-lag, someone came earlier asking for it (laughter)." 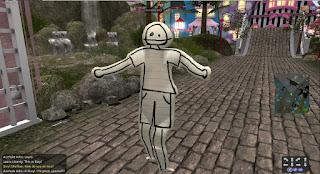 When I asked about the biggest challenge in building this year's town, Ace answered, "I would say the biggest challenge by far was designing the sim from scratch. We didn't even plan on creating all this after we took down Christmas, but Laura had a few small ideas on how to make our old Valentine's Town better. And that small seed just kind of exploded." "I wanted that Tunnel of Love ride," Laura added, "We finished the builds and about a week before we opened, I said to Ace, 'I should have mentioned this before Ace but, I really don't know how to make a ride.'" They chuckled as a Callisto (CallistoKilgannon Resident) walked up.

"Callisto is our friend here," Laura continued, "We stayed up until about 4 am and got it sorted." "I think it came put pretty well," Calisto spoke. Ace then stated, "During testing, the ride occasionally flung Laura hundreds of feet in the air." "It was certainly an experience seeing it all come together," Calisto went on, "coming by for a little each night and seeing the progress that had been made that day. if you had asked me if I thought it would end like this, I'd have said no. It's come very far." Laura smiled, "Aww thanks Calli. Yeah you were here through it all. Building is fun but more fun when people come and can enjoy it." 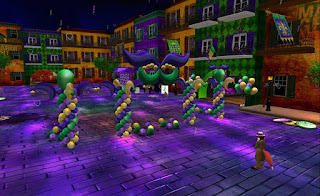 I brought up Mardi Gras Town, which was hundreds of meters overhead, asking if it gets overlooked sometimes. Ace answered no, "It actually seems pretty popular this year. I've noticed more people than I expected going up there since we opened yesterday. ... More than half the people on this sim seem to be up there now." Laura told, "One of the first years I did Townies, I made a smaller version of a skate castle and no one came. I sat on that sim by myself all of December. So if people come, it just makes it so nice." Ace explained why the two towns were not on the same level this time, "Before, Mardi Gras was right next to Valentine's, but the big Mardi Gras dome just didn't look right down here this year." Calisto added, "I think it's more of an adventure when you don't have another town just on the horizon. it doesn't feel like a movie set. So I think you made the right choice with that one Laura." 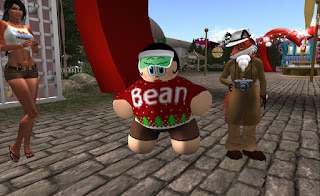 We talked some about some cartoons the Newser did with Valentines Day and cupid in mind. Then Laura looked over her shoulder, "Speaking of funny cartoons, here comes Bean." At first, I noticed a short grayish shape with short arms and legs walking our way. But eventually, Bean (GreenBeanGirl Resident) came clear in view, a cheerfully cartoonish avatar with a green visor had and a Christmas sweater with her name, "Hi friends! Bean here! Callistooooo." Calisto chuckled, "No town is complete without bean. she's got a lot of personality (laughter)." When Bean was told who I was, "Wow, you are famous. ... Ask me what you want. I am open book. ... I am ride conductor. I wave in my chair, and say 'Welcome friends to Townie! Without me, this all would not work." Ace stated, "Bean greets the guests. Lots have taken to her."

Calisto continued, "Laura had a bit of a tough time this year with creating the new town. Every time things change, it becomes less of a setup and more of a build from scratch type of thing. The ride was certainly a challenge. And just ask her about the bridges (laughter)." I asked about the bridges, and Laura answered, "just struggled with them." Calisto explained, "Long story short, the textures have her a bit of trouble since the bridges are composed of so many different pieces. 85 if I'm correct. And they all had to be textured separately, earning them the endearing name of 'effing bridges.' " Ace added, "Yes we spent hours finding music. Instrumental romantic music for the ride, and classic love songs for the rest of the sim."

Bean talked about how good a snack of french fries and a milkshake could be, then described how nice the central area near the waterfall in the back could be when viewed at Midnight, "Laura tell me this, she think of all thing like that. Music special picked out, make good for dance, or relax." She asked to me to be still for a moment so she could take a picture, "I never have Fox as friend before. ... I better take picture in case no one believe me." She then told me she was placing it in her profile pics, which she did.

It wasn't much longer than this that I had to be elsewhere, and Laura had to help someone out. So we told each other goodbye.