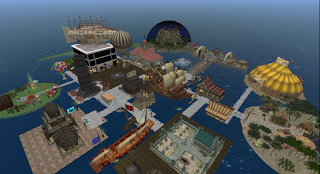 In the article, "Saving Prims," we said, "... Arcadia Asylum, on the Mieville Pond sim.  Be prepared for an adventure there". A conscious effort was made, to keep that sim from taking over the article, because it was worthy of an article of it's own. Returning there, to take notes and pictures, we realized just how understated the line was. It's more than just "an adventure". This sim is a must see, Great Adventure and should be on everybody's to-do list. Aside from the 1,328 free items, there are several fun adventures, to be discovered there.

The landing point, for the sim, is a courtyard, in front of the Cog & Grog Freebie Center. On the other side of the courtyard, we find a teleporter that goes to the various areas on the sim. The areas include; Tropics, Steam Fair, Graveyard, Hobo Town, The Deeps, Space and The Library. Most of the areas can also be reached by walking, flying or just jumping into the water. 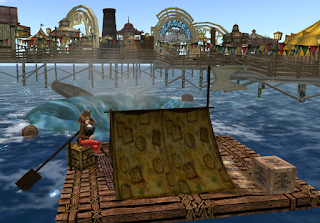 The Deep covers as much area as the surface sim and can be reached in three ways. Within the Cog & Grog, there is a stairway that leads under water. On the dock, next to the Chinese Junk, there is an entrance to Cap'n Nemo's Underwater Observatory, which uses tubes to connect to chambers beneath the surface. You can also just jump off any of the docks, to reach the sea floor. In the deep, you will find underwater habitats, plants, sea creatures. You can even get your own whale or even a kracken. One of the most interesting nautical items, the whirlpool, proved to be be a fun ride. I got one to take home, but, unless I terraform, won't get put out from my inventory any time soon. It has a lot of prims, but can be reduced by removing some of the items that circle the top. 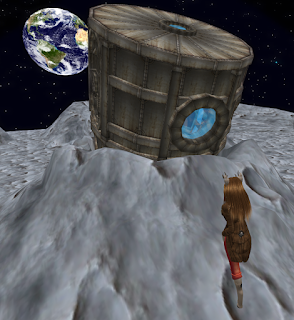 Taking the teleport to the Space area, we find spacesuits, spaceships, planets and asteroids. The most interesting "space" item is found at the courtyard of the sim landing. There, we find a giant cannon, which shoots a bullet shaped capsule to the moon. I had actually been back to this sim several times, before deciding to click on it and see what it does. Next thing you know, the camera switches to an exterior view of the projectile, with your av inside and stars zipping past. We end up on a lunar surface, staring at our crashed ship, with the earth in the distant background. Fortunately, there is a teleport, near by, to take us back down, but, as long as I'm on the moon, I look around for any other interesting things to explore. Sure enough, among the lifeless rocks there is one that has some color to it and there's a large hole at the base, with a churning mist within. Looking in, it seems to go down to a cavern with large gems on the walls. Naturally, Miss been there, done that, had to go into the cavern. All I will say is that, yes, there is an adventure and I went several times, to learn the way out of the conflict with the lunar inhabitants.

Now, safely back home, on my keyboard, I find myself wondering what other hidden adventures are yet to be had at Arcadia Asylum. You can be sure that this writer will return there many times, in the future.
Hope we see you there,
"Sha"
From "Sha's SL Stories"

Posted by Bixyl Shuftan at 6:30 AM