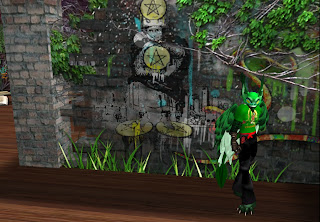 You may or may not know Kelly Yap in Second Life. She’s a green skinned human in second life like the green girl from the original Star Trek that charmed Captain Kirk. I remember meeting Kelly long ago from the "A List" for an art show best in hats. I’m a lousy builder in SL, but I gave it a shot anyway. She’s currently holding a contest called “These feet are made for walking.” I still qualify for trying out, even though I don’t wear shoes (what furry wears shoes?) She asked me to DJ for an art show of hers. I said sure why not, we were already friends. 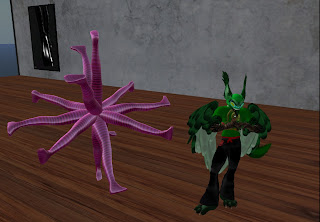 The first floor was created by Trill Zapatero. I saw some pictures of tarot cards what seemed spray painted against brick walls and many grails. The theme itself was grail quest with many framed pictures on the walls. There were grails on the floor that spouted out the letters “Ism” very much like the photo of grails that also said ism on the nearby wall.

The second floor was created by Tani Thor who made scripted art with a few pictures that had a lifelike appearance with 3d scripting. Some of the RL photos looked amazing as well. Kelly Yap seemed afk before her art show so I checked out the third floor. Green feet were the subject of the third floor by Caro Fayray. Her artwork seemed unique as it was centered on what everyone has feet. Kelly later told me that the third floor was not complete.
When the clock hit 3pm SLT, lots of avatars warped out of the blue as if they were hiding behind the pictures. The artist herself Tani Thor warped in wearing an amazing black dress. She spoke Italian but had a text translator to translate into English. She seemed happy that a lot of people were wowed by her art. She also told her photos, which looked realistic, were taken not in real life but in Second Life. 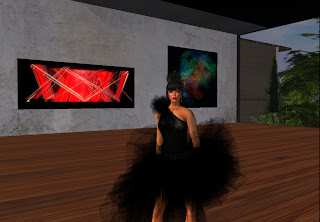 In a short time there was a ton of avatars there dancing along to my music and checking out Kelly Yap’s art show. People were having a fun time checking out Tani Thor’s artwork and/or dancing to my music. Either way from what I could everyone was having fun. Some people spoke Italian but art and fun seemed to break down language barriers.
Kelly Yap had lots of friends check out her art show and Gemma Cleanslate popped in for a sec to look for her friend Trill Zapatero I told her that her buddy didn’t show up. I wanted to DJ for a longer time but my guru showed up online. However I also enjoy Brahma yoga class so it was the greater of two goods. Art is a part of life whether in real life or Second Life, in music or drawings or photography of what goes around us. I may not have a fancy art degree, but I certainly can appreciate art when I see it.
Grease Coakes
Posted by Bixyl Shuftan at 6:00 AM