The fashions of the twenties are the basic foundation of many of today's dresses explained Athene Forder in the first floor of Goddess Apparel's Roaring 20’s Chicago location. 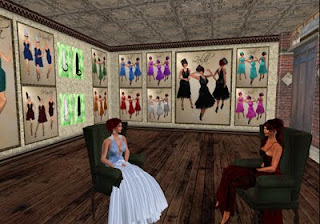 "If you look at the ball gowns of today, the slender style came to fruition in the twenties," stated Forder as she sits in a high-back chair, dressed in an elegant silk gown of her own creation, "It was a time of pushing limits. Men found that women would no longer be forced into the subservient mold of the past. Women had tasted the power of the vote and had learned that they could make changes in other areas of their lives as well."

Perhaps the more men pushed to control women, the more styles limits were pushed, was Forder's comment. Women's hair was cut shorter, as well as their skirt lengths. The best dressmakers of that time were women, but men held the pocketbooks prior to the twenties.

The most popular dress of the era was the flapper. 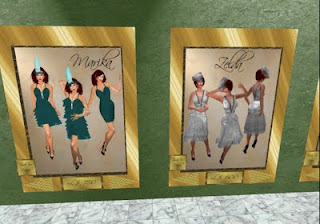 "Well, my guess would be because of it's flair," Forder declared. "It flaunted the staid, lady-like moray of expected female behavior. The style for a woman always included some type of hat. The twenties headdress kept that tradition, but once more pushed the limits, using pearls, beads, and feathers instead of, or in addition to a regular hat."

As for fabrics, Forder stated that cottons were still used, but mostly for the poor. Though the small detailed patterns of these cotton fabrics are a twenty's earmark. Satins tended to replace the heavy silks and beaded fabrics became popular. Though satins were originally from Asia, fabric manufacturers began duplicating the fabrics the best they could to fullfill the growing demands.

"An unusual fact about fashions during the twenties was the flat-chested look," she added. "Many of the women would actually bind themselves to fit the style."

At Goddess Apparel, Forder is making creative decisions. She has styled what she is proud to add her signature to since June of 2008. Her work began with a commission two years ago. Today, she has a portfolio of 79 different gowns. She also has men's jerseys, shirts and jeans. She works two hours a night and six over the weekend.

After a great deal of research about the flapper style, she created "Marika." Her goal was a dress that would allow the wearer to select the amount of fringe she wanted. By using actual photos of styles she loved, she'd then go to her drawing board and attempt to recreate them. She tries to keep a balance of soft pastels, bright jewel tones and dark, muted colors in her gowns. Marika comes in black, lilac, red wine, sapphire and teal.

"I was looking for a sexy style in the flapper tradition. I shortened the length for that bit of edge and then went wild with the fringe," she confessed. "It moves with you as you walk."

"Since then, I've been adding more and more period dresses to the gowns in the Goddess Apparel line," she said. "It wasn't until I looked through my line, with Chicago in mind, that I realized how many of them fit the style of the 1920's, especially the ball gowns."

"Zelda" is her second flapper dress. Instead of a feather, it has a little hat and veil and a more traditional cut to the top. The gown is made out of sequined material and comes in nine different metallic based colors," she informed me. 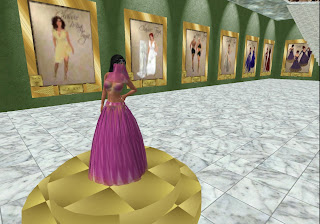 Forder selected a variety of colors that she could give a metallic sheen to. She named the dress after Zelda Fitzgerald, stating that Zelda was the icon of the day. It was her husband that wrote the Great Gatsby. I note that the gown she is wearing during our interview is named Lady Gatsby. It is available in a number of pastels with two exceptions: one is blood red and then she added black to a cream for a dramatic effect. She said that sales of this dress have been doing very well. Both have the shimmer of satin as you move and the skirt sits nicely without adjusting a sit script.

Forder created an alternative dress. She liked the lines so much and the jewels on the back straps, that she made a little cocktail dress from it, "Siren was actually designed as a challenge to myself," she confesses. "I wanted to try my hand at a split skirt... so I split more than the skirt. Siren is done first in silks, but it has a second set inside that is done in see-through chiffons...all held together with silver clasps."

Some of her gowns are adoptable to different time periods. She stated that most of the slender gowns may be considered a modern ball gown that fits nicely into the 1920's. Some of her older Victorian gowns have slender skirts to allow it to fit more eras. The outfits on the second floor of her Chicago location she considers to be more universal in look than the twenties, but would pass in Chicago.

We move on to the playful Leto, which is one of her early creations. She enjoyed adding the feathers. "I was trying to create a design that might catch the eye of the singer Katia Keres. The high cut skirt is surrounded by the feathered flexi. I tried to keep it feathered, so when I changed the colors, I kept as much of the white base of the feather there. This would keep them from all blending into one mess, preserving the outlines." With the more formal style skirt, she created a salsa version with the feathers which lead to the Leto Edge.

One gown demands my attention and I'm entranced with its detail. The Psyche is an elegant wedding gown. Without the train, the gown is perfect for bridesmaids. And, yes, she has veils available so you don't have to visit another store looking for one.

Forder is updating her main store to include multi-dress vendors that will have a note card of the included outfit parts. Some accessories are sold separately beside the appropriate dress.

She has conducted fashion shows in the past and hopes to do them again. Forder is also working on expanding her stores a little. Her main store, located in Newport Keyes, now has a dance area.

Netera Landar
Posted by Bixyl Shuftan at 6:01 AM