Waltzing about the social islands one afternoon I ran into a mesh dragon that looked remarkably like a Seawolf, and I went "Oh, did Seawolf update their dragons to mesh?" -- well, they didn't; this dragon is by DreamCrawler, and at a hefty pricetag of $4700L (!), you're going to have to decide for yourself whether the price is worth the avatar. According to the 50-some positive reviews for the various breeds of this particular dragon (for each breed), I'd say the avatar creator is making quite a lot of $L. 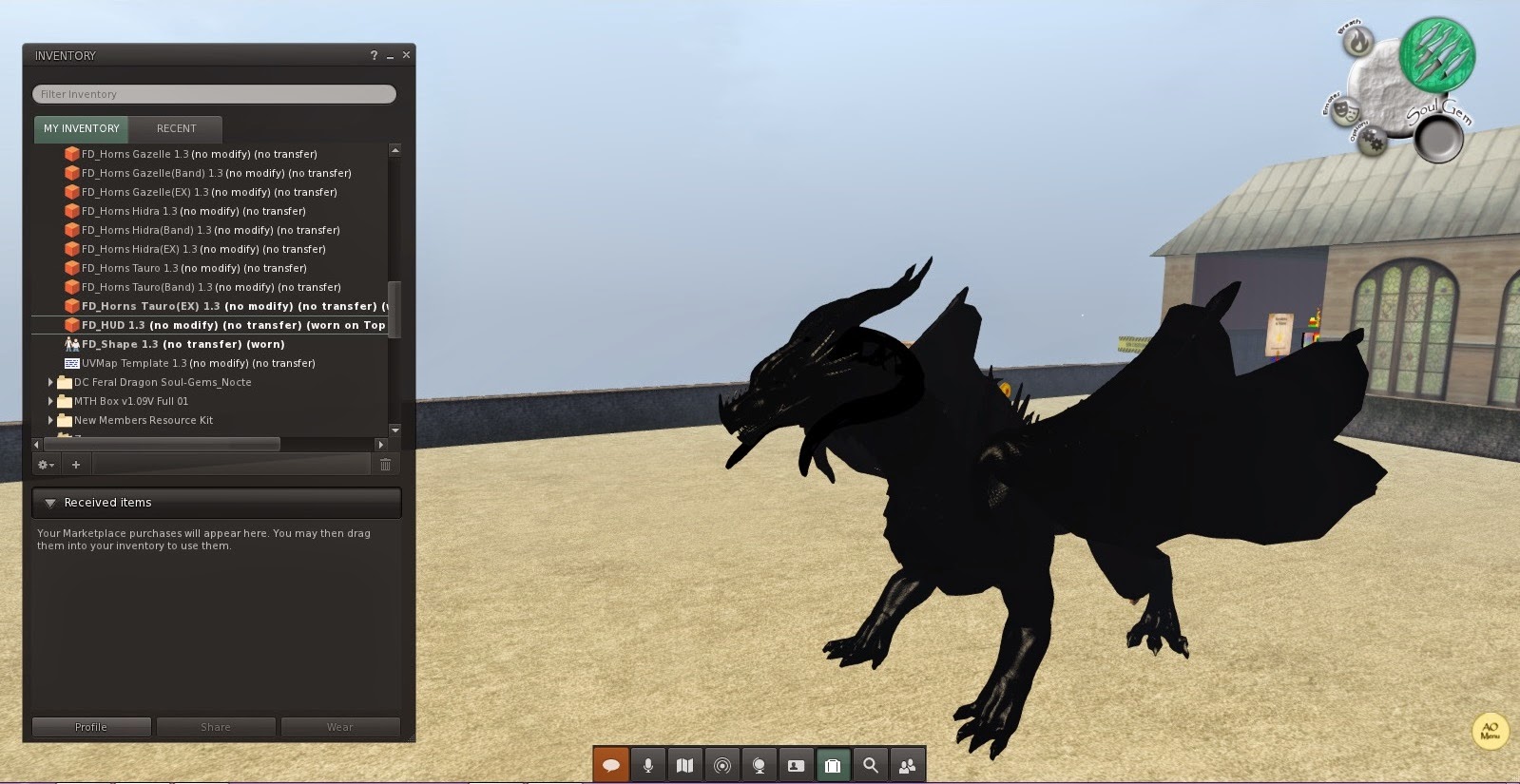 This dragon follows the rest of the DreamCrawler line of avatars; you buy the dragon and get a few "soul gems" that determine its color (buying a dragon gets three gems, each with a different base texture that goes over the dragon mesh). You wear the dragon (itself a solid black blob until you pop in a soul gem), wear the variety of horns (several types) or ear fins (one type) you like, then wear a soul gem and boom, the dragon mesh is colored. This dragon currently has three styles: "Nocte" (mostly reds, oranges and blacks, making me think of volcanic dragons), "Voluptas" (Purples and blues that make me think ice or crystal), and "Marenostrum" (blues and whites mostly, ice drakes).

I grabbed myself a Nocte, popped in a soul gem and went to wander some sims. The animations on it are exceptionally well done and I got a lot of compliments on it. If anyone whined, it was about how the claws appeared "clipped" instead of full-on claws, but you can only do so much with mesh and that's just a minor thing. Flying is good, and every so often the animation has the dragon doing a little mid-air flip if you're hovering idle somewhere. The dragon does not come with a saddle but I think with a little bit of work one could be modified to work with the dragon. The breath weapon is customizable, with three different breaths (fire, frost, or poison gas), and the colors of the breath weapon are editable (one color for starting particles, one for ending particles). 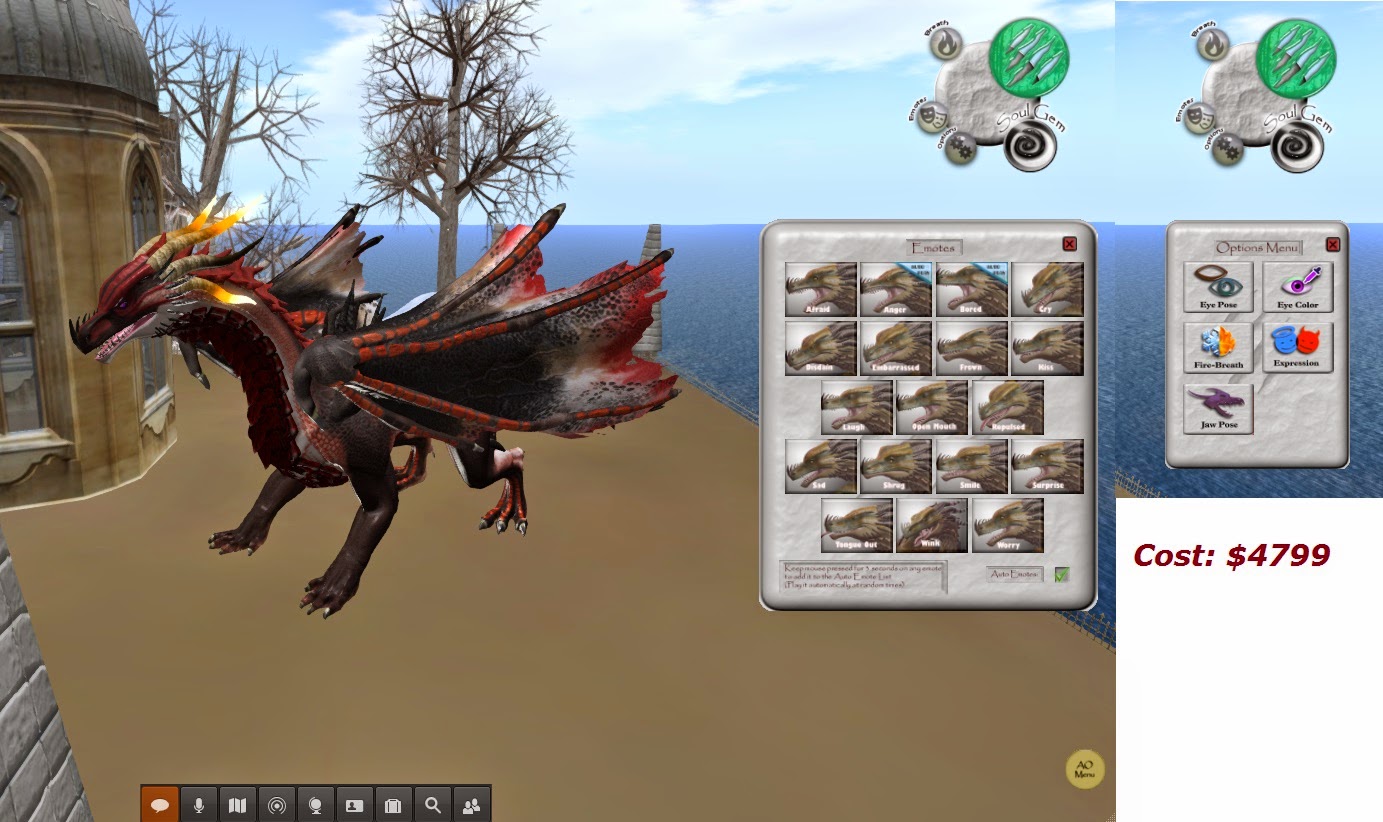 It's not without its flaws. The hud has an expressions tab that has the names of the expressions in a tiny, almost unreadable font that almost requires the hud be resized, especially if someone has bad eyesight (on the plus side, my experience was that dreamcrawler avatar huds are slow to respond... not so with this one). When in flight, the head bobs and weaves, meaning you're not getting a direct line from your breath weapon, but a spray/blast all over the place like a firehose. There's no talkjaw, but this seems to be a theme with mesh objects, so I can let that slide. If you want more colors you have to buy more soul gems, and last I checked, extra color schemes were $999L each for a pack of 3. That's expensive when the easier way would be to add a colorchange hud like the mesh dinosaurs of Prehistorica... which would allow for individual customization of various parts of the dragon rather than just layering over one color scheme. 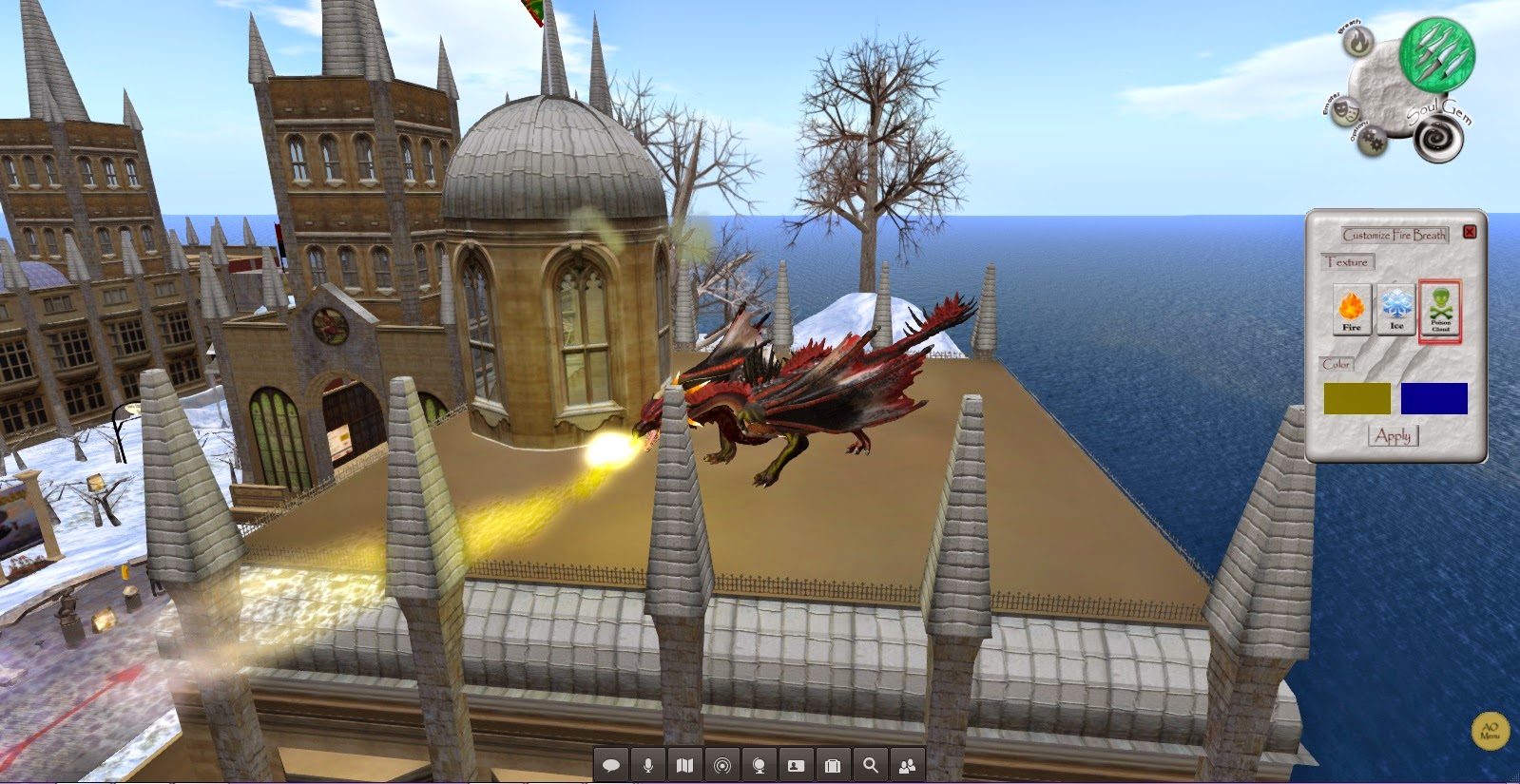 If anything, the real "flaw" is its price. I do not think any avatar with the current level of SL-tech is worth nearly $5000L. A well made dragon like the dragon from Spider Productions is half that (and has options for biped or quad when the Dreamcrawler is just a quad), and this DreamCrawler dragon certainly fits the definition of well-made. That's really the only reason (other than the "blurry" low rez hud, or at least it was blurry to me) that it gets Four Dragon Hoards out of five. If you can afford it, great, because you won't be unimpressed by it. If you can't afford it, there are cheaper just as good mesh dragons out there.

The Dreamcrawler dragon can be found on the Marketplace (here).
Posted by Bixyl Shuftan at 10:00 AM